AC Milan coach Marco Giampaolo reflected on "issues" to deal with in his side after watching them beat Verona 1-0 in a game that left him determined to improve the Rossoneri attack.

A turbulent match was settled by Krzysztof Piatek's second-half penalty, which came after Verona had Mariusz Stepinski sent off and before Milan's Davide Calabria was given his marching orders, and Giampaolo acknowledged that the margin of victory was a narrow one.

He pointed to Verona's packed defence as a significant factor in his side's struggle for goals and also took a swipe at his predecessor, Gennaro Gattuso, by saying that his side had not yet learned to play as a collective.

"The team is working well, finding its balance and I know there are some strengths and weaknesses, but I work to improve the individuals and the team," Giampaolo told Sky Sport Italia.

"Everyone has strengths and weaknesses; there is no perfect side. I like the effort and passion we put into the game, but errors can happen.

"A team that defends with 10 men in their final third are difficult to break down. Verona played their honest defensive game and we were constantly pushing forward. We didn't do it perfectly and of course there is plenty to work on and improve, but the victory helps us to work.

"I won't just brush the dust under the carpet; I know full well we need to improve and there are issues we have to deal with."

The result left Milan with two wins and a defeat from their opening three games of the 2019-20 Serie A season and performances have been steadily improving.

After failing to register a shot on target in their 1-0 defeat to Udinese, Milan edged to a 1-0 victory over Brescia.

Against Verona, Milan had 17 shots on goal, with Suso, Hakan Calhanoglu and Franck Kessie picking their hosts apart with some intelligent approach play, but Giampaolo said his plans for the team have yet to be realised.

"I don't like to improvise," he said. "I want my team to have a structure to work on and some guarantees to build on. There are many talented individuals in the side and I still need to get them to fit within the context of the team unit.

"We must be honest. I don't hide. This team is trying and is accustomed to playing as individuals, whereas I must get them working in the service of the collective.

"We must learn to attack better, that is true." 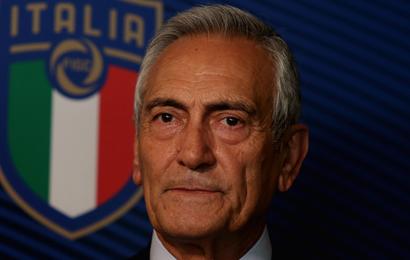 Gravina on Serie A resumption