Real Madrid's most memorable attacking moment during the first half of their title-race twisting 2-2 draw against Celta Vigo was Sergio Ramos launching into one of his driving runs in search of a goal, only to volley the ball into his own face when it arrived.

This botched attack had a claim beyond slapstick, given Zinedine Zidane's LaLiga leaders failed to muster a single shot on target before the break.

Indeed, there was nothing remotely as incisive from an forward line featuring Eden Hazard and Gareth Bale as the move Celta produced for their seventh-minute opener – Iago Aspas shifting smoothly into a pocket of space in front of a ramshackle Madrid defence and threading a perfect pass for Fedor Smolov to coolly slot home.

Hazard was making his first appearance since suffering a fractured ankle in November and, shortly after Ramos' party piece, showed signs of starting to shift through the gears.

In the 40th minute, Karim Benzema pulled out to the left channel and Hazard scampered around the outside, pulling the ball back from the byline for the on-rushing Bale to fire narrowly over.

It was link-up play to cheer Zidane as he tries to get his returning attackers up to speed ahead of the Champions League showdown against Manchester City later this month.

On this evidence, however, Hazard and Bale are playing for one spot. The ever-dependable Benzema is a guaranteed starter, fitness permitting, and Los Blancos missed the benched Vinicius Jr's dynamism for much of Sunday's contest.

Having set themselves a low bar in the first-half, Madrid improved considerably during the second period and hit the front thanks to a couple of sure things.

Toni Kroos' midfield scheming is not annotated with goals too frequently, but he dispatched Marcelo's pass to score for the sixth time against Celta. He has 14 LaLiga goals overall since joining Madrid from Bayern Munich in 2014.

Ramos is, by comparison, somewhat more prolific from centre-back. A smart finish from an offside position showed his radar to be back in order following the earlier mishap and there was little doubt about the outcome when he stepped up for a 65th-minute penalty.

Ruben Blanco erred badly when Benzema and Hazard repeated their first-half link, with the Celta goalkeeper darting from his ground to needlessly bring the Belgium star down.

Blanco guessed correctly but Ramos' sprung from his staggered run-up to dispatch an unerring strike.

Hazard made way for Vinicius in the 73rd minute and enjoyed a warm ovation from the Bernabeu faithful – the sort of reception that sadly only seems to exist in the past tense for Bale nowadays.

As for the other grizzled survivors of Zidane's three consecutive Champions League final triumphs from 2016 through to 2018, they remain his dependables.

They will be asked to go to the well once more the next time Madrid emerge at their famous home ground, faced with a formidable but flawed City in a competition they know like the back of their hand.

It would be a brave person who backs against them but the sight of Celta producing a sting in the tail suggested the years could be taking a toll.

Substitutes Denis Suarez and Santi Mina combined as Aspas and Smolov had before for the latter to score – the lines of communication between Dani Carvajal and Raphael Varane in the backline again appearing unhelpfully clogged.

The lead at the top of LaLiga from Barcelona was only a point at full-time, a situation roughly as comfortable as booting a football into your own face.

Of course, Ramos tumbled theatrically in stoppage time to try and win another penalty and Madrid will strain and scrap for everything until the end of the season. With 46 goals from 24 LaLiga games, don't expect them to blow too many teams away either. The Galactico grind is on.

Previous Messi is 'the man, the history' of Barcelona, says
Read

Next Courtois: Returning Hazard 'worth a lot' to Madrid
Read 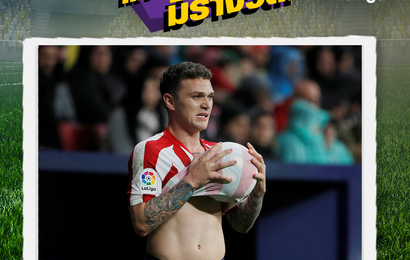