Gareth Southgate lauded Bukayo Saka for earning his England chance and grabbing it in Tuesday's Euro 2020 win over the Czech Republic.

Raheem Sterling's 12th-minute goal was enough for the Three Lions to earn top spot in Group D and secure a home last-16 tie at Wembley, even though France, Portugal and Germany comprise a daunting list of potential opponents.

Mason Mount being forced to self-isolate meant Southgate was able to satisfy a national clamour to start Jack Grealish.

The Aston Villa playmaker supplied the cross for Sterling to head his and England's second goal of the tournament and provide flashes of skill to bring the Wembley crowd to their feet.

But it was Arsenal teenager Saka – a surprise inclusion ahead of the likes of Jadon Sancho and Marcus Rashford – who was the most consistently impressive attacker on display, with his driving run and neat close control key in the move for Sterling's winner.

"Bukayo, I can't speak highly enough of him," Southgate said after the winger was named UEFA's Star of the Match.

"He's earned that opportunity. His performances in training since he's joined this camp have been outstanding.

"He played well in the game at the Riverside [a 1-0 win over Austria where Saka scored the winner]. We've talked about playing him in some of the previous matches.

"He earned that chance tonight and he's grabbed it. He was fabulous."

While Saka is enjoying his international breakthrough, Sterling has been a mainstay for Southgate.

Patchy form for Manchester City in the second half of this season led to calls for the 26-year-old to be dropped but the England manager's faith never wavered in a player who now has 14 goals for his country since failing to find the net at the 2018 World Cup.

"We always felt that we can’t have all the scoring burden lie with Harry [Kane] and over the past couple of years – probably since the game in Seville [a 3-2 Nations League win over Spain where Sterling scored twice], that was a real lift-off moment for Raheem – he's transferred his club goalscoring form into the matches with us.

"When you can get wide players scoring in that way as well it's a huge lift for the team.

"We've had no doubts about [Sterling], we were very clear on that.

"We know at the end of the season he wasn't necessarily a regular for his club but perhaps we're reaping the benefit of that in that he's a little bit fresher than he might have been."

Harry Maguire headed into the tournament far from fresh, nursing an ankle injury that ruled him out of Manchester United's Europa League final penalty shootout loss to Villarreal.

But the centre-back returned to partner with John Stones and led England to a third clean sheet out of three at Euro 2016, producing an authoritative performance.

"Harry has that presence and composure," Southgate said. "His pass through to Kane in the first half was a fabulous ball through the lines. There aren't many defenders in world football who can do that.

"It was important for him to get those 90 minutes.

Southgate added: "We've noted over the last 12 months and certainly the last six months that when you become the captain of Manchester United the impact that must have on your confidence – the improvement in his leadership and desire to step forward and have an influence on the wider group shines through." 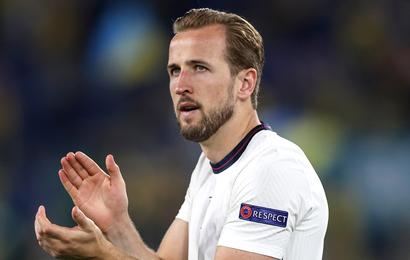