Mauricio Pochettino hopes Neymar can show his talents against Bayern Munich on Wednesday after the Brazilian was sent off on his return to the Paris Saint-Germain starting XI.

Having appeared for 20 minutes as a substitute at Lyon ahead of the international break, Neymar started for the first time since February's Coupe de France trip to Caen when PSG hosted Lille on Saturday.

But the top-of-the-table Ligue 1 clash turned sour for the superstar as he was controversially dismissed in the closing stages of a 1-0 defeat.

Neymar, who tried to retrieve the ball from Lille defender Tiago Djalo before both players were sent off, has earned four red cards since his Ligue 1 debut in August 2017, a tally only topped in this time by Nantes midfielder Andrei Girotto.

The forward's latest misdemeanour is set to keep him out of league action as PSG aim to overturn the three-point advantage Lille secured at the weekend.

But Neymar can for now channel his energy into avenging last season's Champions League final defeat to Bayern when PSG face the reigning European and world champions in a two-legged quarter-final.

The world's most expensive footballer has played only six knockout games in the competition since moving to PSG, although he was ever-present in the five during last season's run.

Now, he is fit again and ready to take on Bayern on Wednesday with coach Pochettino's backing.

"After six weeks, he was very excited to start a game," Pochettino told a news conference on Tuesday, explaining Neymar's red card.

"He's an emotional player, he likes to play, he likes to fight, he's a competitive player. He didn't deserve this red - he was sent off for various reasons - but he knows he has to channel himself.

"I hope that tomorrow everything will be fine, that we can play a very good game, and that the whole team will get the performance we hope for."

"I've known Ney for years," he said. "We know he's a very competitive player. If you look at the action, he got a foul, he came to get the ball, he showed a lot of commitment.

"We're not going over history again. Tomorrow is the Champions League, we learn from our mistakes and we think about what we have to do tomorrow."

Yet PSG, who beat Barcelona in the previous round, are determined not to rely on Neymar (13 goals this season) and Kylian Mbappe (30) alone against Bayern.

"I always preferred to talk about the collective, especially before these kind of games," Marquinhos said.

"When we see our performance in Barcelona, the collective was really strong; we saw it before the individualities.

"If everyone plays their part on the field with the right mindset, the individuals will then get away with it.

"I prefer to put the team forward, we can't always talk about specific cases."

Pochettino added: "We focus a lot on Mbappe and Neymar, but the 11 players who will start tomorrow will have the responsibility to do everything to help us get the win."

The PSG coach will at least be able to call on his superstar duo while Robert Lewandowski (knee) and Serge Gnabry (coronavirus) are out for Bayern.

Lewandowski and Gnabry shared six goals on the only previous occasion Pochettino took on Bayern, then as Tottenham manager on the end of a 7-2 humbling.

"Bayern's strength is its collective, its squad," Pochettino said. "When you win the Champions League and the Club World Cup, you have a very good group, not just 11 successful players.

"We are talking about Lewandowski and Gnabry, who are very good players, but we also have absentees like [Mauro] Icardi and [Marco] Verratti.

"That being said, for sure, for them, these are absences that weigh heavily."

Previous Neymar is like Ronaldinho, his attitude will stop
Read

Next PSG not motivated by Champions League revenge agai
Read 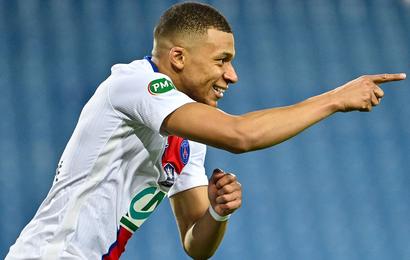