What does the future hold for Kylian Mbappe?

The Paris Saint-Germain and France forward is not short of options as Europe's elite eye a blockbuster transfer.

But Real Madrid are believed to be Mbappe's preference.

Paris Saint-Germain star Kylian Mbappe is only thinking about joining Real Madrid amid interest from Barcelona and Liverpool, according to the front page of Friday's AS.

Mbappe is reportedly unwilling to extend his PSG contract, which expires in 2022.

Madrid are eyeing a 2021 swoop for Mbappe, and while LaLiga rivals Barca and Premier League champions Liverpool are also interested, the French forward wants to move to the Santiago Bernabeu.

- Sport claims Barcelona have already agreed to sign Lyon captain Memphis Depay in January. The report says Barca are now trying to reduce salaries at the club as they look to resolve the futures of Ousmane Dembele and Martin Braithwaite. Dembele was linked with a deadline-day move to Manchester United.

- Juventus are set to reignite their interest in Lyon star Houssem Aouar, reports Calciomercato. Aouar was heavily linked to Arsenal before the transfer window closed, while PSG have also been credited with an interest.

- Milan and Serie A rivals Juve will go head-to-head to sign Salzburg midfielder Luka Sucic, says Calciomercato. The 18-year-old has only made two league appearances for the Austrian champions.

- West Ham are set to confirm the signing of Brentford star Said Benrahma, according to journalist Fabrizio Romano and widespread reports. Benrahma is reportedly going to cost the Hammers £30million.

- Bild reports Borussia Dortmund sensation Giovanni Reyna is set for a new lucrative contract in Germany. The American teenager has been linked with Liverpool and Madrid.

Next Pogba may dream of Madrid, but he's Man Utd's for
Read 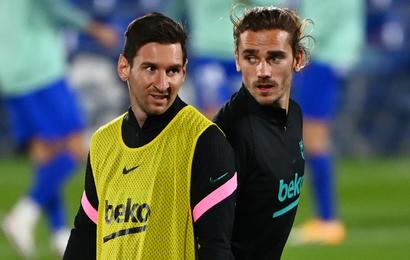