Ronald Koeman has grown tired of questions over his future at Barcelona and is now eager for the arrival of a new club president to end the uncertainty.

After a delay caused by the coronavirus pandemic, elections to determine Josep Maria Bartomeu's successor will be held on Sunday.

Joan Laporta, Toni Freixa and Victor Font are the remaining candidates, with the decision over who will be in charge of the first team likely to sway the minds of many voting members.

Arsenal boss Mikel Arteta and Al-Sadd coach Xavi have been tipped to return to Camp Nou to replace Koeman should the next president decide a change in leadership is required.

However, Koeman's own position has been strengthened by some recent results, specifically the Copa del Rey triumph over Sevilla this week, with Barca recovering from a 2-0 first-leg deficit to win the tie 3-2 after extra time.

Koeman accepts the decision is largely beyond his control, but he has been wearied by the constant questions put to him about his chances of staying in the role.

Speaking ahead of Barca's LaLiga trip to Osasuna on Saturday, he said: "It's not in my hands. I have another year of my contract. Luckily, there'll be a new president in two or three days and we'll talk.

"I'm focused on winning games and on the possibility of winning the Copa del Rey. The rest is not in my hands.

"Of course, having a president is really important. It's the biggest club in the world and it's essential to know the possibilities that will open up to improve a lot of things. That's it."

When asked about the public discussion around possible replacement coaches, Koeman said: "This happens when a new president is coming. It doesn't bother me. I'm focused on my job. There are so many games that I can't think about other things.

"I'm not interested or bothered by names like Xavi or others. A new president is coming in and he'll decide. I'm tired of answering this kind of question.

"We're doing well, but we have to look for consistency. We have to concentrate on what we're doing. We're still lacking a lot.

"We've improved in terms of individual errors, we press more and there are phases of the game where we have improved with having three at the back. There are various things beyond the system."

Three wins in a row for Barca without conceding a goal has come at a key time in their season. As well as reaching another Copa final, their 10th in the past 13 seasons, they have closed to within five points of LaLiga leaders Atletico Madrid, having played a game more.

With Atleti facing Real Madrid on Sunday, Koeman is likely to be supporting Zinedine Zidane's side for a day to give Barca's title chances a further boost.

"The main thing is our game. We have to win, and then the best result is that the team in first loses," he said.

Next Messi named LaLiga's Player of the Month for Febru
Read 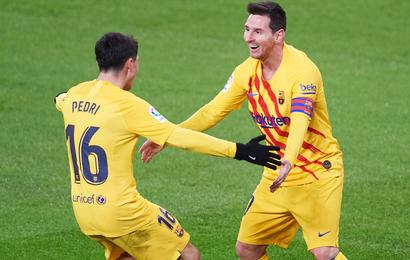 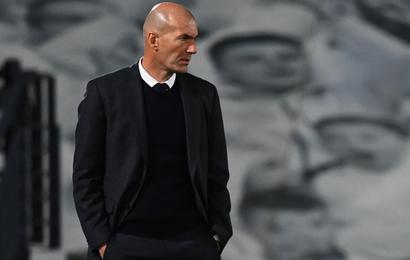 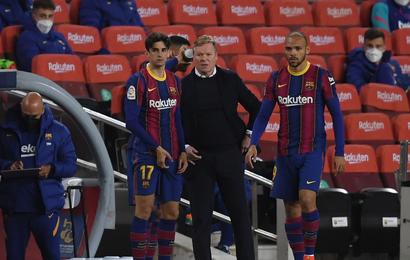