Antonio Conte says there is still plenty of room for improvement from Christian Eriksen but hailed the midfielder's renewed "intensity" after he sealed a point for Inter on Sunday.

Eriksen looked poised to leave Inter during the mid-season break after the club's CEO Giuseppe Marotta revealed he had been placed on the transfer list.

The former Tottenham man has forced his way back into Conte's plans, though, and secured a 1-1 draw for his side against Napoli after Samir Handanovic's first-half own goal.

His fine strike was his 24th from outside the area in the top five European leagues since he joined Spurs in 2013-14, with only Barcelona's Lionel Messi (59) scoring more in that period.

The result ended the Nerazzurri's 11-game winning streak in Serie A, though they remain firm favourites to win a first league title since the 2009-10 season thanks to a nine-point advantage over second-placed Milan, who beat Genoa earlier in the day, with seven games left.

Conte still wants to see more from Eriksen, but is pleased with the improvements he has made to his game in recent months.

"Things changed when I had more time to work with him, and also I needed him to realise there is attacking and defending in football," the Inter boss told Sky Sport Italia.

"He took a while to adapt to a very tactical style of football that we have in Italy.

"We tried in every way to get him settled and tried various roles. I know he can do much, much better.

"He is becoming more aggressive and showing more intensity, which certainly benefited the whole team."

The result means Inter have earned the most points (75) in the top five European leagues this season, overtaking Premier League pacesetters Manchester City (74).

Conte was delighted with his side's ability to bounce back from Handanovic's calamitous own goal and believes it was the kind of game they might have lost last season.

"This was a game we may well have lost in other situations, albeit undeservedly, and we'd have struggled psychologically," he explained.

"Instead, we saw a team that knows what it's doing, that never loses sight of the right way forward, even if something unlucky happens, such as the own goal.

"Don't forget Napoli were at full strength and I considered them one of the favourites for the Scudetto going into the season.

"We dropped two points compared to Milan this weekend, but a draw away to Napoli is not to be snubbed."

Inter are in Serie A action again on Wednesday when they travel to Spezia. 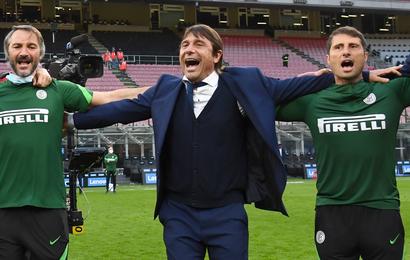 Conte: Inter players are worth more