Sporting KC handed Seattle Sounders their first home defeat in nine matches this season, scoring twice in the first half and holding on for a 3-1 victory Sunday at Lumen Field.

The victory brought the visitors within two points of the first-placed Sounders in the MLS Western Conference table, with one fewer match played.

KC captain Johnny Russell set the tone in the 31st minute with a beautiful free kick from just outside the area to give the visitors the lead, and Daniel Salloi doubled the advantage before half-time.

After Fredy Montero answered for Sounders in the 51st minute, Cameron Duke sneaked behind the defence in the 72nd minute to seal the win.

A brace from Gustavo Bou helped New England Revolution expand their lead atop the Eastern Conference with a 2-1 win over Montreal.

Kacper Przybylko found the net for the third straight game, putting home a rebound in the 85th minute to salvage a 1-1 draw for Philadelphia against Inter Miami as Phil Neville's side remain bottom of the table.

New York City FC matched their season-high in goals, scoring four times after the break in a 5-0 demolition of Orlando City. 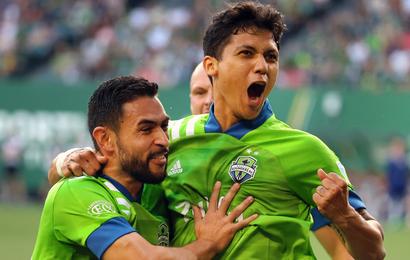