Lionel Messi poses such a danger that Lyon have revealed they will "play hard" to stop Paris Saint-Germain's superstar in Sunday's Ligue 1 showdown.

Lyon head coach Peter Bosz spoke of his admiration for Messi but warned that his team would ditch the niceties during the evening game at the Parc des Princes.

After scoring five goals in six Champions League games against Lyon during his long Barcelona career, Messi is now a rival at a domestic level after his shock Camp Nou departure.

A cameo against Reims before the international break was followed by a first full 90 minutes in the midweek Champions League draw with Club Brugge.

Now Messi appears likely to make his first Ligue 1 start as Lyon head to the capital, where they have won only once in their last 13 league away games (D2 L10). Intriguingly, however, that win came in their most recent visit, a 1--0 victory last December.

Bosz, the former Ajax and Bayer Leverkusen boss, said watching Messi on television used to be appointment viewing early in his career, and he will hope the hours spent studying his performances can help when it comes to stopping the Argentina captain.

"I think we have to defend collectively against Messi," Bosz said. "I have watched many, many, many of Messi's games. I only stayed home to watch him when I was at Heracles, a small club in Holland. We watched all his games with my staff.

"It will be a pleasure to meet him. And it would make me even happier if we win against him. It won't be easy. He is a player with extraordinary qualities and only as a team can you play against Messi. Alone, it's not possible.

"But you have to play hard against him, of course. If you are too polite, he will dribble past you. You have to be tough against him but with respect."

It will be Messi's first home game for PSG, assuming he plays, and it remains to be seen who else might feature in the frontline.

Kylian Mbappe was forced off early in the second half against Brugge with ankle trouble, but PSG boss Mauricio Pochettino said on Saturday that the forward had been able to train since that blow.

That raises the prospect of Mbappe perhaps being involved on Sunday, which is something Lyon would hope to avoid.

The 22-year-old World Cup winner has scored eight goals against Lyon in Ligue 1. Only against Dijon has he scored more in the French top flight, netting 11 times against the team that finished bottom of the table last term.

Mbappe reached the career landmark of 100 Ligue 1 goals when he scored twice in PSG's 4-2 win over Lyon in March.

Previous Messi, Neymar and Mbappe 'like the best actors in
Read 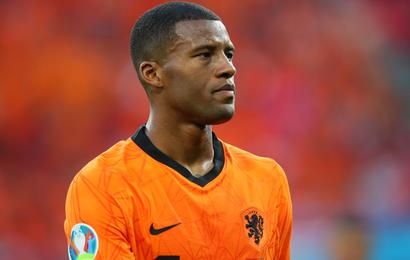