Zinedine Zidane told Real Madrid to keep going "to the death" after a goalless draw at Getafe hit their LaLiga title prospects.

Having cut Atletico Madrid's lead down to one point by winning El Clasico, Zidane's defending champions were second best at times at Coliseum Alfonso Perez on Sunday.

That was the highest number of saves from shots on target that the Belgian has made in games for Madrid where he has not conceded a goal, and centre-back Eder Militao was also kept busy.

The Brazilian defender made 10 clearances, the most he has made in a match for Madrid and one short of the highest number made by any player for Los Blancos this season, after Nacho made 11 against Liverpool in the Champions League.

A makeshift back four of captain Marcelo, Victor Chust, Militao and Alvaro Odriozola faced a barrage of crosses from a Getafe side who belied their recent poor form, having previously won just one in 12 LaLiga matches (D4 L7) leading up to the game.

Zidane said after the match: "We have given our maximum. It's a draw but we continue fighting. It will not end here.

"There are many games, but the team that is going to win will need a little of everything, especially having its players.

"We have to do our best. Look at ourselves and not look at others. It's a very difficult, competitive league. Every three days we must always be good. We must go to the death and our mentality will not change."

Atletico's 5-0 win over Eibar earlier on Sunday means their lead is up to three points over Madrid and five over third-placed Barcelona, who have a game in hand.

Toni Kroos was absent for Madrid, with Zidane saying the midfielder had been "in discomfort".

"We have a lot of games and we can't do foolish things. We have to manage that," said the French head coach.

Madrid's unbeaten away run in LaLiga extended to 11 games (W6 D5), their longest run without losing since October 2017 (W13), and the starting XI Zidane fielded had the youngest average age of any of his teams in the league this season, at 26 years and 138 days.

Courtois was immaculate and later offered an intriguing reason for why he felt Madrid had perhaps not performed as many would have expected.

"Playing at Getafe is never easy, the pitch was dry and it was hard to move the ball around," Courtois said, in an interview released on Twitter by the club.

"We tried, we had a couple of good chances, as did they, and that's where I had good saves."

He pointed to the moment Getafe hit the post through a header from Jaime Mata midway through the first half, saying: "I caught it with my finger."

That fingertip touch had not been obvious to the naked eye. What was clear was that this result comes as a jolt, and a reminder that with the likes of Sergio Ramos, Raphael Varane, Eden Hazard, Kroos, Ferland Mendy and Federico Valverde unavailable, even the depth in Madrid's squad is not such to guarantee wins at tricky grounds such as Getafe's.

"In adversity you find the strength of a group," Courtois said. "It is what we are doing all season. You always have to stand up and that's what we do." 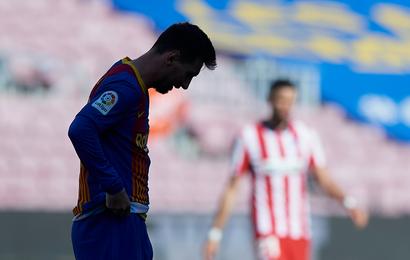