The meeting with their Catalan neighbours at Camp Nou is the first of three games in eight days for the league leaders, with a trip to Las Palmas and a potentially crucial showdown with Atletico Madrid to come next week.

With Girona's visit coming only four days on from Barca's Champions League draw with Chelsea at Stamford Bridge, Valverde has suggested he could be willing to rotate his squad.

When asked if he might rest Messi and Suarez, he told a news conference: "It's a possibility but I'm not going to reveal that."

Valverde did confirm, though, that Ousmane Dembele is ready to make an impact after spending Barca's last two games on the bench.

"We hope he's ready, yes," he said of the France winger. "That's why he's been called up.

"It will depend on the coach who comes on and who doesn't, depending on how the game goes."

Valverde does not intend to make huge changes for Saturday's game, though, despite suggestions Barca are beginning to show a dip in form, with three draws in their last five games in all competitions.

"I don't think we've had a slump," he said. "It's true we've had two straight games at home against [Deportivo] Alaves and Getafe that have cost us a lot but it's also true we've been very good in the Copa del Rey.

"I think we're doing well, we know we're in a process where matches are more decisive than before.

"I won't give any clue to Girona. They put a man-marker on Messi at home but I don't think it's changed their personality so much.

"They're an absolutely recognisable team. I saw them against Sevilla, Athletic [Bilbao]... they have a spark, they go forward and try to intimidate you.

"I won't change my plan for the game against Girona excessively because they're a team who will go for the game, who won't sit back and can do you damage because they have players who are good on the counter-attack.

"It's a three-game week but we're not focused on Atletico because we want to reach that game with the minimum of the gap we have now, which would mean we've won the two games beforehand. So we focus on tomorrow [Saturday]."

Next I thought he was an actor! - Valverde dodges Arthu
Read 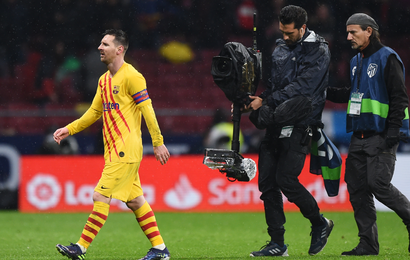