Lionel Messi is "by far the best player in the world", according to Barcelona team-mate Frenkie de Jong.

Messi is regarded as one of the best ever footballers following his exploits for LaLiga giants Barca, with Juventus forward Cristiano Ronaldo also in the conversation.

A record six-time Ballon d'Or winner, Messi has claimed 10 LaLiga titles and four Champions League crowns among other honours since debuting for Barca in 2004.

"If Lionel Messi is talking and giving you advice, you take it as he is by far the best player in the world. If he gives advice, you listen," De Jong told BBC Radio 5 Live.

"Sometimes he says you have to be deeper or to the side, small things but it makes the difference."

LaLiga leaders Barca – two points clear of bitter rivals Real Madrid atop the table with 11 games remaining – will restart their 2019-20 campaign against Real Mallorca on June 13.

Messi has trained separately after Barca confirmed their captain suffered a quadriceps injury ahead of LaLiga's resumption on June 11 following a delay due to coronavirus.

Barca superstar Messi topped LaLiga's goalscoring charts with 19, ahead of Madrid forward Karim Benzema (14), when the league was suspended in March.

Next Messi 'a little higher' than Ronaldo, but Gundogan
Read 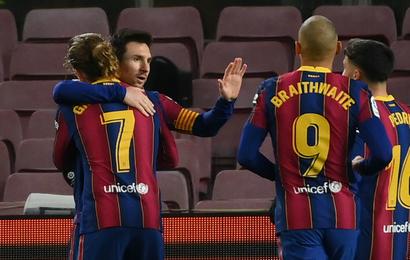