Boschilia and Valere Germain both scored doubles as Monaco returned to the top of Ligue 1 with an emphatic 4-0 home win over bottom-of-the-table Lorient.

Monaco have scored an unbelievable 64 goals in their first 21 league games and re-take top spot from Nice, who are two points behind. Champions Paris Saint-Germain are third, a further point back.

Lorient were blown away in the first half at Stade Louis II, failing to register a single attempt on goal as Monaco struck three times.

Boschilia got the ball rolling after 24 minutes when the visitors' goalkeeper Benjamin Lecomte was unable to deal with Radamel Falcao's looping header back into the box, punching it straight to the Brazilian for a simple finish.

The 20-year-old struck again four minutes later, firing between Lecomte's legs after a driving run from Bernardo Silva had created the opportunity to move on to six league goals this season.

Germain ended the match as a contest eight minutes before half-time, producing cool finish on the rebound after Falcao had smashed against the post with a long-range drive.

He then completed the scoring just before the hour mark, taking over Djibril Sidibe's charge forward and sending a low finish under Lecomte. 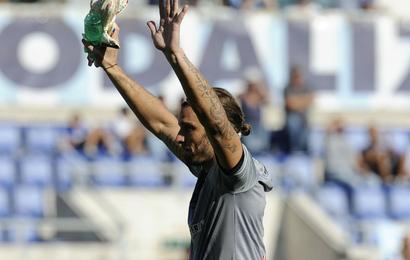