Rafael Nadal remained tight-lipped on an apparent injury scare after coming through a gruelling third-round encounter with Karen Khachanov at the US Open.

The Spaniard also had his right knee heavily strapped and television footage showed him flexing the joint prior to his match.

In a post-match news conference, Nadal was asked: "How is your body feeling right now, especially your knee?"

"[It was] just something that I felt, but I try always during the tournaments to not speak much about these kind of things," the top seed replied.

"When the tournament is over, [it] is better and easier to talk.

"But my personal feeling is I am going to be at my 100 per cent for the next one [a fourth-round clash with Nikoloz Basilashvili]."

Nadal backed his vanquished opponent, who came into this tournament boasting a career-high ranking of 26th, to enjoy plentiful future success.

"He's improving always. He's young. He has everything," said Nadal of Khachanov.

"He's a great player. I really see him winning a lot of matches in his tennis career, no? He has a lot of good things. He has a great future to come.

"He had a great attitude on court during the whole time, playing four hours 20 [minutes], fighting all the time, playing aggressive, playing great tennis, having some mistakes at some important moments, too, but without saying a bad word.

Next US Open: Milos Raonic vs Stan Wawrinka
Read 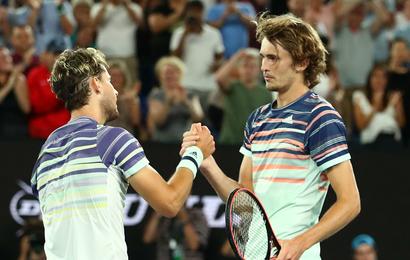