Portugal secured Nations League glory on Sunday as Goncalo Guedes' second-half strike earned a 1-0 victory over the Netherlands at the Estadio do Dragao.

The host nation had been touted as favourites ahead of the inaugural Finals and they lived up to that billing in Porto, adding more major silverware to their European Championship triumph three years ago.

Cristiano Ronaldo had netted a hat-trick in the 3-1 semi-final win over Switzerland but he was kept relatively quiet on this occasion by Virgil van Dijk and Matthijs de Ligt.

Instead, it was left to Guedes to settle matters, exchanging passes with Bernardo Silva and smashing home from the edge of the box, although Jasper Cillessen may feel he could have done better.

Cillessen, winning his 50th cap, was the busier goalkeeper in the opening half-hour, although he was only called upon to make a trio of routine saves – twice from Bruno Fernandes long-range efforts either side of gathering Jose Fonte's header.

Fernandes remained a threat, curling narrowly over from the edge of the box as the hosts continued to look likeliest to score as the interval approached.

The Netherlands were sharper after the break and Rui Patricio got down smartly to thwart Georginio Wijnaldum, but on the hour Portugal had the goal their play deserved.

Guedes found Silva, who returned the ball with a nicely disguised pass, and the Valencia man rifled into the bottom-right corner via the left hand of Cillessen.

Patricio saved impressively from Memphis Depay's header as the Netherlands sought a swift response but the closest they came was Marten de Roon firing over from 20 yards as Portugal held on to lift another major international trophy.

Goal! Gonçalo Guedes breaks the deadlock with a fierce drive!

Into the second half, it's been a contest without many clear cut chances. Portugal seem to be slowly turning the screw!

Chance! Bernardo Silva stings the palms of Cillessen with a long-range drive!

Do van Dijk and de Ligt have the defensive partnership to silence Cristiano Ronaldo tonight?

Cristiano Ronaldo has spoken! The Juventus star won't be wanting a repeat of the last time Portugal had a final on home soil. They lost to Greece in the Euro 2004 final!

Now for the Netherlands! Ronald Koeman is keeping it nice and simple! No changes to the side that started against England! Keep an eye out for Frenkie de Jong in midfield, he is quite the football player.

Team news! First up the hosts! No surprises Cristiano Ronaldo starts! Three changes from the side that beat Switzerland 3-1 Fonte, Danilo and Guedes all come into the team.

Party time in Porto! Can hosts Portugal do the business tonight? The home fans will be expectant! 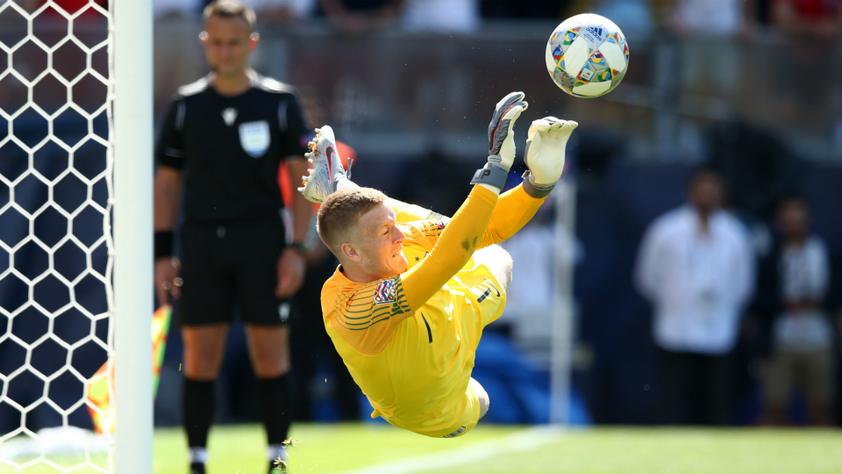 So here we go! The Nations League final. It has come to this! Can Netherlands upset the odds and defeat hosts Portugal? I must say I was impressed with the Oranje against England, but really can they pull this off and win their first international trophy since 1988?

Good evening! Welcome to the Live Updates for the Nations League final between Portugal and the Netherlands. Cristiano Ronaldo inspired the Portuguese against the Swiss, grabbing a hat-trick whilst the streetwise Netherlands picked off England to reach the final in Porto. Who will win to lift the first ever Nations League trophy?! As ever join me for the usual pre-match patter, including goals and highlights from the game.