Jamie Vardy and Leicester City believe they "can beat anyone" in this season's Europa League and have quickly set about proving their point.

The Foxes clinched a 2-1 away win over AEK Athens on Thursday to maintain their 100 per cent start in Group G thanks to a penalty from Vardy and a fine strike from Hamza Choudhury.

Leicester's star striker, whose goal came from one of his two shots, while he created a further pair of chances, backed his side to make a major impression in the competition.

"We believe we can go far in this tournament," Vardy told reporters after the win in Greece.

"We just want to keep going. Every single game, we'll put in 100 per cent. On our day, we can beat anyone, so we're looking forward to it.

"We've not got the biggest squad, but we're picking up wins and playing well. We're keeping that close-knit togetherness and it shows, seeing games out like that.

"I think we were better in the first half. They got a goal back and started putting a bit of pressure on us, but we've held in there and we've defended really well."

Leicester manager Brendan Rodgers hailed the attitude shown by his players to secure victory after AEK had responded through Muamer Tankovic early in the second half.

"I thought it was a great mentality and a great effort by the team," Rodgers said, his side having restricted the hosts to three shots on target.

"They had a little bit of momentum second half - we have to dig deep and stay strong - and I thought we did that very well.

"Then it's just about being professional. Away from home in Europe, it's always tough, but I thought we saw the game out very well.

"I always think if you can start well, and we've done so with two good wins, then you're absolutely delighted."

The win was Leicester's first away from home in the Europa League or UEFA Cup, having lost the away legs of first-round ties against Atletico Madrid in 1997-98 and Red Star Belgrade in 2000-01.

Previous Mourinho: I wanted to make 11 substitutions at hal
Read 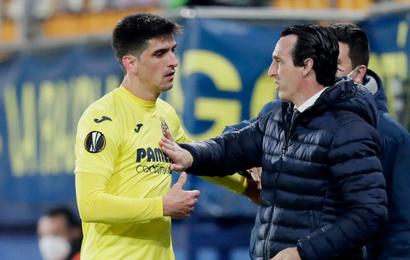