Two age-old rivals face off on Sunday evening as the Netherlands take on Germany at the Johan Cruijff ArenA. Fresh from getting the better of their arch rivals in the UEFA Nations League, Ronald Koeman’s side will be looking to continue to maintain their undefeated start to Group C. As ever you can watch all the action Live & Exclusive via beIN CONNECT.

After missing out on the last two major tournaments, The Netherlands are desperate to reach Euro 2020 especially with the  Johan Cruijff ArenA hosting games in the competition. So far, Ronald Koeman has impressed with the side, guiding the Oranje to the Nations League finals which is set to take place in the summer & starting strongly in their Euro 2020 qualification campaign.

A routine 4-0 win over Belarus, including a late goal from Liverpool defender Virgil van Djik means that the Netherlands top the group on goal difference. More importantly they will be facing a Germany side who have had a poor World Cup and stuttered in the recent Nations League campaign. In team news, Atalanta defender Hans Hateboer has been called up into the side following the injuries of Denzel Dumfries & Kenny Tete and is likely to start at the back. Elsewhere, and Koeman has a fully fit side to choose from.

How to Watch Online 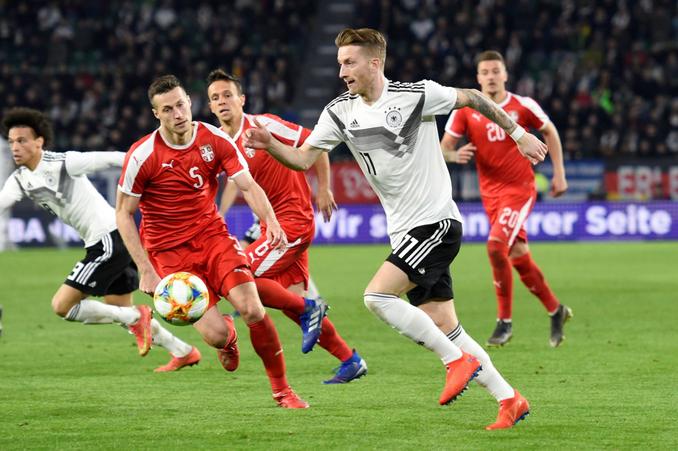 As for Germany, they will be opening up their qualification in desperate need of a victory to halt their recent slide. Having unexpectedly decided to stop calling up the Bayern Munich trio of Mats Hummels, Jerome Boateng and Thomas Muller the pressure has piled on Joachim Löw as he looks to freshen up his squad for a tilt at the 2020 European Championships.

Germany warmed up for the contest with a stale 1-1 draw with Serbia. Leon Goretzka scored a second-half equalizer as a new-look Germany failed to get the better of their opponents. A visit to Amsterdam should prove to be the toughest test for Die Mannschaft, although easier games are coming as Germany aim to qualify for a thirteenth consecutive European Championship. With the pressure on Löw, don’t be surprised if the World Cup-winning coach comes up with a statement win to prove the doubters wrong.

In team news, Leroy Sane is likely to recover from a rough tackle received midweek, whilst Marco Reus could be handed a starting spot ahead of Timo Werner. Manuel Neuer should stay in goal, amid calls for Löw to drop the Bayern Munich keeper. Toni Kroos is also likely to start in midfield after sitting out of the Serbia friendly.

It certainly promises to be a fascinating encounter as the Netherlands take on Germany. You can follow all the action vie beIN CONNECT.