It seems a lifetime ago that Carlo Ancelotti guided Napoli out of the group stages and promptly left his job in early December. Since then, Gennaro Gattuso was hired to lead the club forward in what will be his first taste of Champions League football as a manager.

For a team of such heritage in Italy, Napoli has never reached further than the round of sixteen in each of their nine appearances in the competition. In the group stages, Napoli defeated reigning European Champions Liverpool at home and followed it up with three draws and two wins to finish in second place in Group E.

Napoli has a poor overall record against Spanish sides in two-legged games, losing their last four games against La Liga based opposition. Their last defeat to Spanish opposition came from eventual winners Real Madrid in the 2016-17 season, eventually losing 2–6 on aggregate.

In team news, Gattuso should start Dries Mertens in attack. The Belgian international has five goals in six appearances in the Champions League. Lorenzo Insigne should also get the nod alongside Mertens, whilst Kalidou Koulibaly will anchor the defence. The Senegalese international is a yellow card away from a suspension in the tournament. 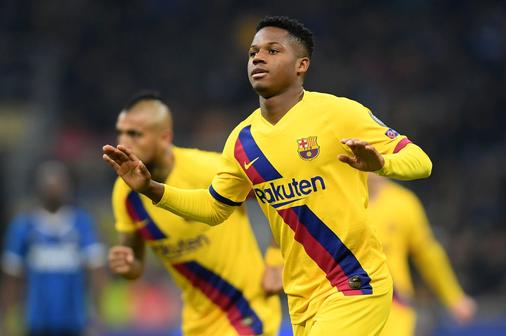 Just like Napoli, Barcelona is heading into the round of sixteen with a new manager who has no Champions League experience. Faltering domestic form saw Barca dispense with Ernesto Valverde and hand the job to Quique Setién at the start of the year.

The former Real Betis coach has had a steady if not spectacular start as Barcelona boss and his side is currently battling it out at the top of the table with Real Madrid.

The Champions League will always be the true test of the Spanish giant’s season and with Leo Messi reaching the twilight years of his career the pressure is on the Blagaura management to create one more side capable of challenging for Europe’s top club prize.

You have to go all the way back to the 2004-05 season for the last time Barcelona did not progress past the round of sixteen, four Champions League titles have followed in the years since.

Teenager Ansu Fati became the youngest goalscorer in Champions League history with his winner against Inter Milan in matchday six. The victory away in Italy also saw Barcelona register their 150th victory in the competition.

In team news, Fati could be in line to start at the Stadio San Paolo. The teenager has impressed in recent weeks alongside Messi and Griezmann and has seemingly taken his opportunity with both Dembele and Suarez ruled out for the rest of the season through injury. In suspension news, Sergio Busquets and Nelson Semedo could miss the second leg if they pick up a booking.

It certainly promises to be a fascinating encounter as Napoli takes on Barcelona in the first leg. You can follow all the action and the remaining Champions League games via beIN CONNECT.