In 2004, a young Karim Benzema was called up to Lyon’s first-team squad by his manager of the time Paul Le Guen.

As was customary at the time, any new arrivals into the Lyon fold had to stand up and speak to his new teammates in front of a everybody. When he was subjected to jokes and laughter, a steely-eyed 16-year-old was not taking any prisoners:

“Do not laugh. I’m here to take your place”

In the January of that season, Benzema was handed his professional debut.  Fast forward to the following campaign, and despite struggling for minutes under new coach Gerard Houllier, the young striker’s love affair with the UEFA Champions League was in full flight.

On his competition debut in the group stage against Rosenborg, Benzema started and scored. The goals then flowed on all fronts, European and domestically.

While the young French strikers' reputation grew on the continent, he was a relative unknown on British shores. That was until the 2007-08 season when Benzema scored an important double at Ibrox against Rangers on that last matchday of the group stage and then hitting the net in a draw against Manchester United.

His performances garnered the interest of United manager Alex Ferguson who was full of praise for the striker. It prompted Lyon president Jean-Michel Aulas to accuse the Scot of tapping up his prized asset.

The reward for his performances came quickly. In March 2008, he signed a new contract at Lyon, making him one of the highest-paid footballers in France. Countless individual honours followed, including Ligue 1 Player of the Year, but with all of that, came the admirers.

Another season in France followed, with 17 league goals to boot, and that was enough to convince heavyweights Real Madrid to make their move. On 1 July 2009, it was announced that Lyon had reached an agreement with Madrid for a fee rising to 41 million euros. 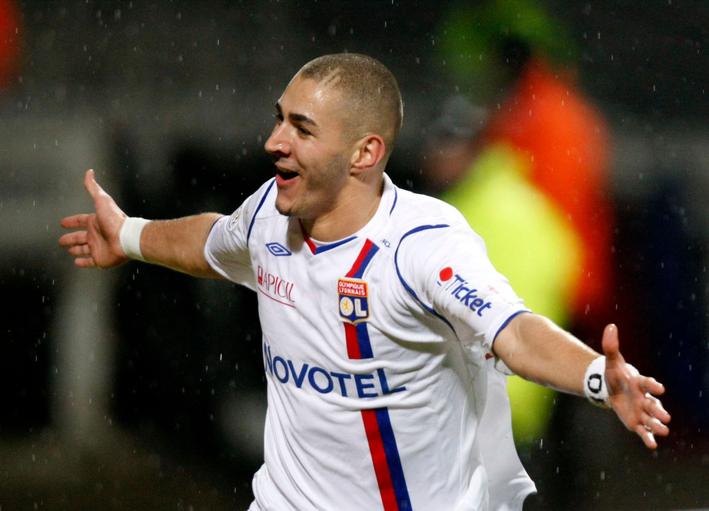 Although he enjoyed success in France, the young striker was an emerging star at the time and became a part of Florentino Perez's new project alongside the likes of Cristiano Ronaldo and Kaka, but life wasn’t easy at the beginning for Benzema.

Manuel Pellegrini preferred to start Gonzalo Higuain in attack, and when Jose Mourinho came in, he wasn't particularly keen either. However, after a meeting between the player and the coach, they soon formed a mutual respect and Benzema’s confidence in front of goal benefitted. His tally of 32 goals under Mourinho during the 2011/12 campaign is his best in a Real Madrid shirt to date.

The arrival of Carlo Ancelotti saw Benzema take up a much more prominent role in the Real Madrid attack. He became part of the famous ‘BBC’ frontline with Cristiano Ronaldo and Gareth Bale. A trident, whose total season tally added up to a staggering 97 goals, which would start a sustained period of success for Madrid, and the reckoning of Benzema as a Champions League great.

Ever since that 2014 success, Benzema has been heralded as a key cog in the Madrid machine. Even during the tough times under Rafael Benitez, Julen Lopetegui and Santiago Solari, the lad from Lyon has remained the constant. Particularly under Zinedine Zidane: a figure he regarded as a personal footballing hero.

On 20 September 2017, Benzema signed a contract extension at Madrid until 2021. Later on, March 6th of the following year, Benzema made his 100th UEFA Champions League appearance.

The forever workmanlike and predatory instincts of Benzema pounced on one of the Champions League final’s biggest errors from Loris Karius. A moment in time that changed the tie and shifted the balance of the match in Madrid’s favour against Liverpool.

The Champions League has also represented personal landmarks for the Frenchman. His 200th Madrid goal came in a group stage game against Plzen.

The importance of Benzema has been emphasised more since the departure of Cristiano Ronaldo.  No-shows from Bale and Marco Asensio saw Real Madrid heavily criticised.

Benzema was one player that few could criticise as he finished with 30 goals in all competitions. And even to this day as Perez and co. try to engage Galactico Version 3.0 which an influx of young exciting talents from across the globe, Benzema continues to remain the figurehead.

He scored twice in Real Madrid's 6–0 crushing of Galatasaray, achieving two new milestones: he becomes the second player after Lionel Messi to score in 15 consecutive Champions League seasons and also the third Real Madrid player to score 50 goals in the competition. His own personally tally is now up 64 – fourth on the all-time list and just seven shy of Madrid great Raul.

His reward for his relentless dedication and level of performance was a new contract in February which will keep him in the Spanish capital until at least 2022.

He’s now up to 500 appearances for Madrid in all competitions.  So back when he was 16, he wasn’t joking when he said: “I’m here to take your place”. He really meant it. And the Lyon lad, who became Madrid’s main-man, and is now a European elite, certainly has no intention of giving up his own.