Mohamed Salah has been a revelation in a Liverpool shirt this season and he will hope to continue a stunning debut campaign against some familiar faces in the shape of Roma in the Champions League on Tuesday.

The Egypt winger swapped Rome for Merseyside in a deal that could rise to €50million in the close season and, after never really being given a chance to display his talent at Chelsea, has shone during his second stint in the Premier League.

Salah's form saw him named PFA Players' Player of the Year on Sunday, and Roma will be all too aware of his genius when they visit Anfield for the first leg of their semi-final tie.

But just how good has Salah been? With the help of Opta, we have crunched the numbers behind his spells at Roma and Liverpool.

Salah's strike rate at Roma was undoubtedly impressive. In 83 appearances across all competitions, he found the net on 34 occasions, with his minutes-per-goal ratio standing at 193.6.

But the numbers at Liverpool this season are staggering. In 46 appearances, Salah has 41 goals, celebrating a strike every 89.3 minutes.

Salah has also been chancing his arm more in a Reds shirt, with his 176 shots so far this term almost matching the 192 attempts he registered during two years in Rome, while he already has more shots on target (86 to 83).

While Salah's phenomenal goalscoring record may have been somewhat unexpected, there should be little surprise that he has also been key to creating for his team-mates.

And Salah is already closing in on the tally of 18 assists he achieved during his time playing for Roma, racking up 11 for Liverpool thus far.

In terms of chances created, Salah has stayed pretty much with the trend set at Stadio Olimpico. He created 163 chances at an average of 2.2 per game, while at Liverpool he has created 82, down slightly to an average of two per game.

GIVE ME THE BALL

For a player of Salah's undoubted creativity, it is hardly news that he enjoys being on the ball.

But Salah is seemingly making better use of his possession. He has already completed 106 dribbles this term having completed 120 at Roma, giving him a dribbles completed ratio per 90 minutes of 2.6, as opposed to the 1.6 he achieved in the Italian capital. 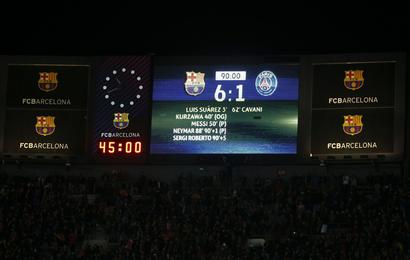