World number one Karolina Pliskova survived to reach the US Open third round, while Shelby Rogers triumphed in the longest women's singles match at Flushing Meadows.

Pliskova lost the opening set but rallied to outlast Nicole Gibbs in three at the year's final grand slam on Thursday.

American Rogers made history as she eliminated 25th seed Daria Gavrilova in a marathon, surpassing the record for the longest US Open women's match set in 2015.

Ukrainian fourth seed Elina Svitolina moved into the round of 32, but eighth seed Svetlana Kuznetsova crashed out.

PLISKOVA STAYS IN HUNT FOR NUMBER ONE

The Czech's hopes of retaining her position atop the WTA Tour rankings were boosted following Thursday's 2-6 6-3 6-4 victory.

Defeat would have seen Pliskova surrender her top ranking but she dug deep to prevail against Gibbs.

She remains in contention for the number one ranking along with four other women.

ROGERS WINS SURVIVAL OF THE FITTEST

The second-round match on Court 10 surpassed the previous record in New York by 10 minutes.

Johanna Konta needed three hours and 23 minutes to see off Garbine Muguruza at the grand slam two years ago.

"Right before I went to the locker room, my coach told me," Rogers said. "I was like, 'Oh, that's pretty cool, casually setting records today.' We'd been battling out there. You try to stay in the moment. I didn't feel like it was the longest match ever, but it's starting to set in a little bit now. Going to be sore!"

SVITOLINA INTO THIRD ROUND

It was a composed performance from Svitolina, who was a 6-4 6-4 winner over unseeded Evgeniya Rodina.

A five-time title winner in 2017 after claiming the Rogers Cup three weeks ago, Svitolina reached the third round for the third consecutive year.

She is the 2004 US Open champion but Kuznetsova was knocked out of the tournament by Kurumi Nara, who triumphed 6-3 3-6 6-3.

In the hunt for the number one ranking, Kuznetsova hit 45 unforced errors as her dream of dethroning Pliskova came to an end.

"I haven't been playing my game for really the last two matches, I was just fighting," she said. "I had my chances, I didn't use them. I felt like I was prepared, I just couldn't bring it." 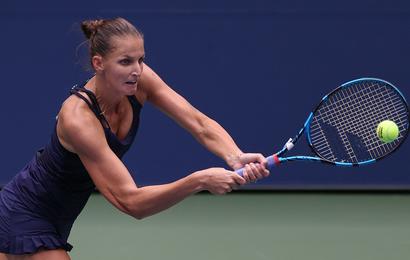