You can watch the Live Match Stream of Inter Vs AC Milan via beIN SPORTS CONNECT.

Icardi was his side's hero with a late strike that completed his hat-trick against the Rossoneri in the same fixture last season, and he once again came up trumps in the derby by heading home in added time at San Siro.

The right-wing cross from Matias Vecino was an inviting one for Icardi, but Inter's captain was fortunate Milan goalkeeper Gianluigi Donnarumma initially came to claim the ball only to misjudge the flight, leaving the striker to nod into an unguarded net.

Victory for Inter extends their winning run to seven games in all competitions, while Milan tastes defeat for the first time in nine matches.

90+3 Peep! All over at the San Siro, Inter edge AC Milan! Mauro Icardi with a late header! Match report to follow!

90+1 GOAL! Late drama at the San Siro! Who else but Mauro Icardi! The Inter Captain with a header to give Inter all three points! Scenes!

90- Three minutes of stoppage time. Will we have a late winner?

86- Chance AC Milan! Rodrigez with a cross-come-shot, which is palmed away by Handanovic. Hello, this game is seemingly waking up!

82- Dangerous looking free-kick for Milan, Suso's effort nips off Icardi, meanwhile, Frank Keisie is subbed Tiémoué Bakayoko is on. The corner comes to nothing (deep sigh)

80 - Suso! His first-time shot is comfortably saved by Handanovic

78- Some kinda chance?! No, No, Borja Valero acrobatically smashes the ball over. Stand down.

72- Calhanoglu is off! It's not been the best game from the Turkish international. Striker Patrick Cutrone is on, can he be the hero for Milan?

69- Inter make a sub as they look to freshen things heading into the final twenty minutes. Keita Balde is on for Ivan Perisic

66- Milan are righly trying to slow down the pace now, they have been under plenty of pressure in the second half.

61- Chance! Inter! Vecino flicks a header just over! Inter are knocking on the door here...

59-  Vrsaljko has been a menace on the right wing, arguably Inter's biggest attacking asset in the second half. One of his crosses needs to find Icardi...

55- Higuain, who has been starved of chances throws a boot at a Bonaventura cross. So far the second half has not lived up to the spectacle of the first 45.

52- Borja Valero (He played at West Brom don't you know) attempts a shot from close range that flies wide!

47- Vrsaljko wins the first corner of the half for Inter, it's wasted!

Peep! Inter Milan get us back underway!

Big fan of this Viper based effort from the Inter fans! Okay, back to the football! 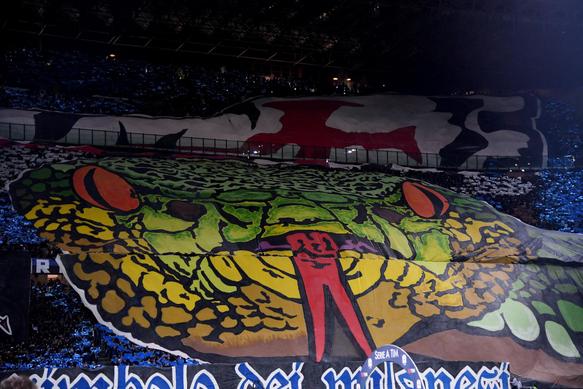 Just a casual Tifo from the AC Milan fans, sure. 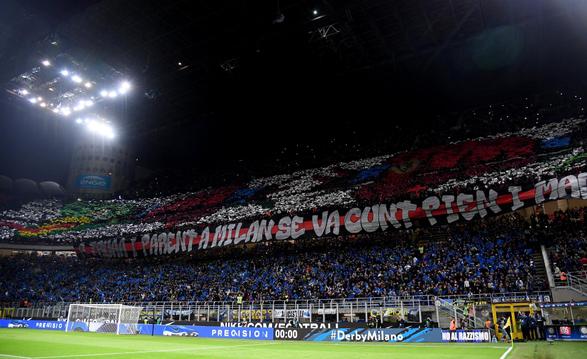 Well, that was a bit special! Very enjoyable! As promised! Some Tifo photos!

48- Calhanoglu hoiks one over the bar. The Turkish international has been wasteful in front of goal thus far!

45- This has been a very good half of football. Perisic smashes into the tackle with Calabria. Tasty!

41- Goal?! Disallowed for Milan. Mateo Musacchio turns it in but he is well offside! VAR confirms it!

40- Borja Valero with a dream through ball to Icardi, Milan defender Romagnoli comes in with a well-timed tackle.

37- Chance for Inter! Icardi was primed to score! Vrsaljko whips in a delightful cross & Inter's number 9 is inches away from latching onto it, just long! Close!

33-  Chance! Inter hit the bar! De Vrij pounces on a knockdown from a corner and his looped volley hits the upright. It's the best chance of the game!

30- I'm enjoying the pace of the game, plenty of zipping around and crunch into the tackles. Incidentally, Borja Valero is on for Nainggolan.

26- Nainggolan clashes again with Biglia. This time the Belgian is floored. Inter boss Luciano Spalletti is livid. The midfielder receives the magic spray on the sidelines. Spanish midfielder Borja  Valero is getting ready.

21- Boom! Pyro rings out from the stands, Perisic guides a header towards goal. Donnarumma is on hand to acrobatically palm the effort away.

18- Both Lucas Biglia & Radja Nainggolan have clashed whilst trying to get the ball. They've seemed to step on each other's ankles. Ouch. A momentary stop in play as both players limp of the pitch.

16- Good stuff by Suso on the right wing, he beats his man and lays the ball to Kessie who promptly smashes the balls into the stand from a tight angle. Anyone else in the Milan team, and that might of been on target!

13- Inter has stepped things up, and are bossing possession. Milan are struggling by playing the ball out from the back!

11- Goal?!? Disallowed by VAR, Brozovic's cross is flicked on by Vecino to Icardi who smashes the ball into the roof of the net, but the Inter captain is offside, after a minute the referee gives a goal-kick. It could have been 1-0 Inter!

8 - Calhanoglu attempts a potshot from just outside the box after his initial effort is blocked. The ball trickles out for a goal kick.

5- Inter are pressing high and getting in the faces of their local rivals, so far Milan are keeping their composure. It's been a high-tempo start to proceedings!

3- Early chance for Milan, Calabria makes a surging run from right-back, a quick pass to Suso who clips a shot just wide.

2- It's a feisty atmosphere inside the San Siro, both sets of fans are in full voice. For now, Milan knock the ball around much to the frustration of the Inter fans

Peep! We are underway at the San Siro!

Right! We are just about to get underway! Magnificant Tifo's on either side (I'll try and get some photos up soon)

We are under 15 minutes from Kick-Off! I'm hoping for goals! Last time the sides faced off in the league it was a 0-0 draw....

How important can Gianluigi Donnarumma be tonight? It's scary to think that the AC stopper is only 19-years old. 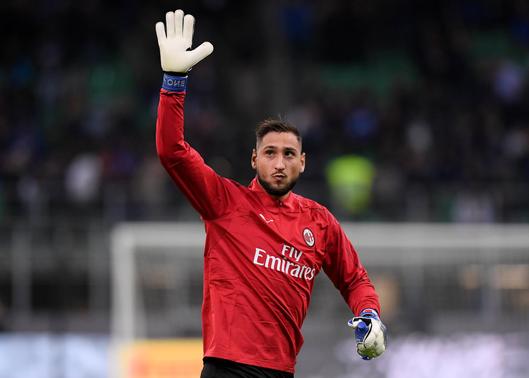 We only have Marcel Desailly in the studio! I seem to recall he did pretty well with AC Milan, right?

Now for AC Milan! It's an expected 4-3-3 from the Rossoneri! Higuain starts up front! His battle against Icardi will be fascinating!

Our 11 Rossoneri to take on Inter
Gli 11 rossoneri in campo per il Derby#InterMilan #MILANosiamonoi pic.twitter.com/jA0nwl5hUY

So! We kick-off at 21:30 and former AC Milan defender Marcel Desailly with Andy Kerr in the studio, along with all of the goals across Europe!

Now for a rather fancy looking AC Milan changing room. I'm quite enjoying the phrase "we're going to be a team of devils" there, just an FYI.

All looks well in the Inter dressing room this evening! Importantly they look set up with all the kits. Just a guess but I think Mauro Icardi will be starting...

Our changing room is ready ahead of the #DerbyMilano! 📸👕😍

Hello! Welcome to the Live Updates of Inter Vs AC Milan in the Derby Della Madonnina. It promises to be a feisty encounter at the San Siro, so join me for all the latest team news, Live Match Commentary and all the goals as they go in! It should be a good one so stick around!

Sunday evening will see the Derby Della Madonnina take place between Inter Milan and their city rivals AC Milan. As ever you can watch all the action Live & Exclusive via beIN SPORTS CONNECT.

Inter Milan will be hoping to get the better of AC Milan with the Nerazzurri currently in fourth place in the Serie A standings. It’s been a mixed season to date for Luciano Spalletti’s side who have lost twice already this campaign to Sassulo & Parma & dropped points to Torino in a 2-2 draw.

Fortunately for Inter, they are currently on a four-game winning streak in the league and are building up a head of steam before attempting to catch up with Juventus at the top of the table. In team news,  Inter will be sweating on the fitness of Matias Vecino who left international duty with Uruguay with a hamstring complaint, although it is widely expected that the 27-year-old will be fit for the contest.

Inters Talismanic captain Mauro Icardi will be the man to watch on Sunday. The Argentine international has been in sensational form in front of goal with five goals in his last eight appearances for the club. The 25-year old relishes leading his side into battle and will certainly be looking to find the back of the net. Icardi has a good record in the Derby Della Madonnina and scored a hat-trick in a 3-2 win the last time Inter hosted AC last year.

As for AC Milan, they are currently eleventh in the Serie A table and are on an undefeated streak of six games in the league. However half of these have been draws against the likes of Cagliari, Atalanta & Empoli. Despite their lowly place in the league, Rossoneri fans will be encouraged with their recent form which has seen them comfortably defeat Sassuolo & Chievo.

The test of Inter is a completely different proposition, and boss Gennaro Gattuso knows full well the passion and desire to win a Derby Della Madonnina having spent 13 trophy-laden seasons at the heart of the Milan midfield.

In team news, Gattuso is widely expected to keep with the same side that played in the 3-1 victory over Chievo. Expect a 4- 3- 3 formation, with Gianluigi Donnarumma in goal the likes of Lucas Biglia & Frank Kessie anchoring the midfield and Suso & Turkish international Hakan Calhanoglu providing the width in attack.

Argentine attacker Gonzalo Higuain spoke out over the week of how he was forced out from Juventus by the arrival of a certain Cristiano Ronaldo in the summer. Well, Juve’s loss has been Milan’s gain with the 30-year old attacker six goals in seven appearances in all competitions for his new side. Last time out Higuain bagged a brace against Chievo and would write himself into AC Milan folklore with a winning goal on Sunday evening.

It certainly promises to be a fascinating clash as Inter takes on AC Milan in the first Derby Della Madonnina of the season. As ever you can watch all the action Live & Exclusive via beIN SPORTS CONNECT.