Juventus returned to the top of Serie A after goals from Aaron Ramsey and Paulo Dybala earned them a 2-0 Derby D'Italia victory over Inter at an empty Allianz Stadium.

Maurizio Sarri's side were clinical in a surreal atmosphere – supporters have been barred from attending matches until April 3 amid coronavirus precautions – securing a third consecutive league win after Ramsey netted for the second game running, while substitute Dybala doubled the hosts lead with a scintillating strike.

Cristiano Ronaldo failed to find the net for the first time in 12 league matches on a night when he could have set a new Serie A record goalscoring streak, the Portugal star missing two excellent late chances.

But there was no hiding Sarri's satisfaction as his charges bounced back from their Champions League defeat to Lyon with a deserved victory against one of their title rivals, who are now nine points behind, although Antonio Conte's side have a game in hand.

Samir Handanovic, on his return from a hairline fracture of his finger, made a smart reaction save to keep out Matthijs de Ligt's close-range header after seven minutes, and Ronaldo then fired a shot into his midriff from 20 yards.

Juve's strong start continued, with Blaise Matuidi's angled drive forcing Handanovic into a low, diving stop, while Inter were restricted to shots over the crossbar from distance by Nicolo Barella and Antonio Candreva.

Marcelo Brozovic gave the champions their first real scare when he struck a curling effort towards goal from outside the box that Wojciech Szczesny parried away, ensuring the sides went in level at the interval.

Juve's breakthrough came nine minutes after the restart when Alex Sandro played Matuidi into the box and his cross was blocked by Alessandro Bastoni, only for Ramsey to pounce on the loose ball and fire it in off Stefan de Vrij's leg from six yards.

Dybala replaced Douglas Costa five minutes later and soon made his mark on the game, immaculately trapping a long pass before exchanging a one-two with Ramsey,  turning Ashley Young inside the box and firing into the corner of the net with the outside of his left foot.

Conte threw on Christian Eriksen as Inter sought a way back into the game and he sent a rising drive narrowly over Szczesny's crossbar, but the visitors' evening took another turn for the worse when Daniele Padelli was sent off from the bench following Brozovic's foul on Matuidi.

Ronaldo fired two late shots narrowly wide of the target as he just missed out on claiming another piece of history, but the night nonetheless belonged to Juve.

Now for Inter Milan! Lukaku and Lauturo play together in attack. Ashley Young will play as left wing-back. Alexis Sanchez and Christian Eriksen have to settle for a place on the bench.

Ronaldo had some fun with the fans tonight!

Team news! Cristiano Ronaldo makes his 1000th appearance! He joins Higuain in attack! Aaron Ramsey will line up in midfielder whilst Leonardo Bonucci plays alongside Matthijs de Ligt. A win tonight will see Juventus return to the top of the table.

So it's a very different warm up for Juventus tonight!

A potentially season-defining game for Antonio Conte's side. If there is anyone who could get a result it would be the former Juve manager!

It's a huge game in Turin tonight! Who do you think will get the win?

Good evening! Welcome to the Live Text for Juventus Vs Inter Milan. The Derby d'Italia will be played behind closed doors tonight due to the coronavirus outbreak in northern Italy. It promises to be a strange atmosphere in Turin! Six points separate the sides in second and third place, and a win for Juventus tonight could put the title out for reach for Inter Milan. Join us for all the build-up, team news and text commentary from the game. 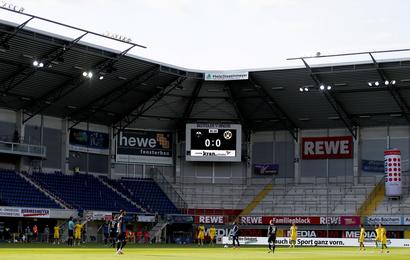