Former Iceland boss Heimar Hallgrimsson has been unveiled as the new boss of Qatar Stars League side Al Arabi on Tuesday and has vowed to return the struggling side to glory in a "long-term project" even though Arabi have a habit of firing coaches. The side nicknamed the “Dream Team” made Hallgrimsson their fifth coach since 2017.

Hallgrimsson, 51 admitted that he had spoken to the likes of MLS side the Vancouver Whitecaps and Bundesliga side Stuttgart prior to choosing the offer from Al Arabi, however, the former dentist stressed that he was attracted to the long-term project offered by the club.

“What attracted me to come to Al Arabi, the ambition in the club from the president & the club, the ambition to build up the club and to make it great again. It’s a big challenge. The club has had a historical past and wants to have that success again.”

“Secondly I was impressed by the club and president that this is a long-term project to the build for the future and to sustain the club with success for the future.”

Whilst Hallgrimsson revealed that he was excited to work in Qatar, a country which he believes is fast becoming a hub for football.

“On a personal note, for me myself to be in Qatar everyone knows that everything that here is going on in football with technology, software, equipment along with the new buildings and stadiums, all the knowledge is in Qatar so to improve as a coach this is the place to be.”

The Icelandic coach has signed a one and a half year contract, with an option for an extension, reacted playfully to the suggestion that he may not be given time with the club. “I know that this is a hot seat, Hopefully, a guy from Iceland will be able to cool it a little. Everyone has been supportive, from the Chairman and the people around the club and I believe we have a long-term project in place.” 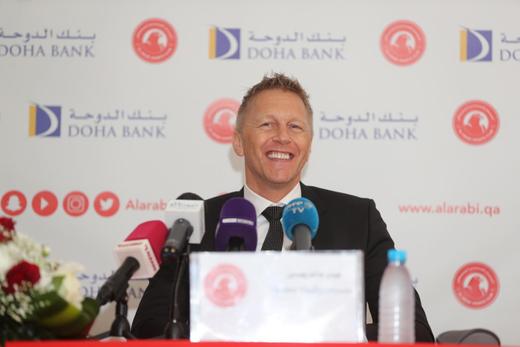 Hallgrimsson revealed that he spoke with former Swedish national team coach Roland Andersson ahead of the move whilst two members of his coaching staff have had extensive experience in Qatar.

With the signing of the former Iceland coach, a host of big names such as Icelandic international Aron Gunnarsson & Marseille playmaker Dimitri Payet have now been linked with a January move to Al Arabi. Hallgrimsson added that he was sure he would be fully supported in the transfer market.

“We will do whatever it takes, we will evaluate the squad for ourselves and we will sit down with the board, this year will be a development year and after four or five months we will have an idea next season.”

“If in January we say we will need changes I am confident that we will get the support of the president.”

Hallgrimsson’s first test as Al Arabi manager will come on the 21st of December when he takes on Lusail in the QNB Stars League Cup. The Qatar Stars League will resume after the 2nd of February after a break for the AFC Asian Cup.