Thierry Henry wowed and stole the limelight throughout his time in England.

The Frenchman’s catalogue of stunning strikes left an imprint on many a football fan’s memory. Henry’s athleticism, brute strength and dazzling footwork left you breathless and amazed at just how he performed such majesty.

Despite an inauspicious beginning to his Arsenal career in 1999, Henry soon adapted to his new role up front having previously been deployed out wide at both Monaco and Juventus. His debut season in North London ended with an impressive 26 goals in all competitions and proved to be a more than suitable replacement for Nicolas Anelka.

Henry’s knack of calmly scoring from one-on-one situations, added to his blistering speed that left many defenders for dead, was a potent combination that made him one of the most feared marksmen in the Premier League at the turn of the millennium.

His eye for the spectacular became evident in the 2000-01 season with a goal against Manchester United that is still revered to this day. With his back to goal and 30 yards out, Henry flicked up the ball before he swivelled on the spot and volleyed past a helpless Fabien Barthez to secure three points for Arsenal.

Complemented by Dennis Bergkamp, the man from Les Ulis spearheaded the Gunners’ quest for glory in 2001-02 as a Premier League and FA Cup double was attained largely thanks to Henry’s 32 goals in all competitions. Although a disappointing World Cup would follow with France, Henry remarkably matched his previous season’s tally 12 months later as Arsenal lost their Premier League crown but retained the FA Cup.

It was in 2003-04 however that Henry and Arsenal’s finest hours would come. The No.14 scored an incredible 39 goals, 30 of which came domestically as Arsene Wenger’s side wrote their name into immortality with their ‘Invincible’ Premier League crown. The highlight during an unprecedented campaign came at Highbury as Henry almost single-handedly turned around Arsenal’s halftime deficit to Liverpool to win 4-2 and claim the match ball in the process.

Henry’s second of the game, in particular, was a thing of beauty. Having won possession in Liverpool’s half, he powered his way through a defence that literally wilted at his feet and tied themselves in knots before his clinical finish past Jerzy Dudek. A disappointing 2004-05 season for Arsenal was compensated by Henry racking up another 30-goal haul as the FA Cup was won again, but the following year would bring with it personal achievements as club records were tumbled.

In a UEFA Champions League group stage game away to Sparta Prague, Henry’s double saw him surpass Ian Wright’s tally of 185 goals to become Arsenal’s all-time top scorer. Further records would tumble too as Cliff Bastin’s all-time league record of 151 goals for Arsenal was broken, as well as Henry scoring his 100th league goal at Highbury in the stadium’s final season. Disappointment would hinder another stellar campaign though as Henry captained Arsenal in their 2-1 defeat to Barcelona in the 2006 Champions League Final.

Injury would blight Henry’s final campaign in the capital, as his lowest season tally of 12 goals saw him sign off prematurely before he joined Barcelona in the summer of 2007. But the story wouldn’t end there as Henry’s swansong came in January 2012 during a loan spell from New York Red Bulls. 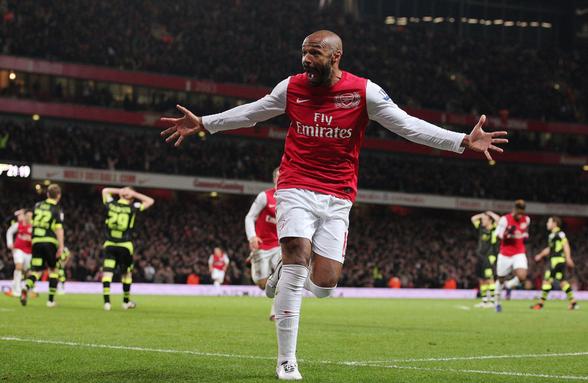 It was brief, but the second coming of an Arsenal great left more memories and in particular a winning strike in an FA Cup third-round tie against Leeds. It was typical Henry, who received the ball in the far left-hand side of the box before a controlled touch allowed a clinical right-footed finish to seal the victory.

Voted the greatest Gooner of all-time in 2008, there is no doubt how Thierry Henry is thought of by the Arsenal faithful.