Football commentary can be a strange beast. Fans are split, unsure even to the individual if they like the rapid-fire staccato style of Latin and South-American coverage, punctuated by goal exclamations that go on for longer than the replays do. Some love the idea of more than one voice, a co-commentator (or a colour commentator as some call it) while others prefer just one person describing the action. Some live for puns, others want a mountain of statistics, while others just want something that will long in the memory.

The greatest climax to a Premier League season there has ever been, Sergio Aguero cementing his place in footballing history with a goal that echoed through the ages. Voted the Premier League’s moment of the decade and match of the decade, it was an earth-shattering instant, a finale worthy of legend, and the crescendo to the Manchester City machine that rolls on even to this day.

It is impossible, however, to fully grasp the magnitude of this single strike, even if last-minute goals carry their own aura of mystique and magnificence. Just ask Ole Gunnar Solskjaer, who was always an incredible player for Manchester United, but almost every mention of his playing career is shackled to his injury-time winner against Bayern Munich in the Champions League Final. This time, it was United’s cross-town rivals that seized the moment of all moments, and at United’s expense, to claim the Premier League trophy.

In a season where Manchester United demolished Arsenal 8-2 (prompting Arsene Wenger to embark on a transfer spree that included Mikel Arteta), it was the 6-1 City win at Old Trafford that may have originally signalled the rise of the blue moon over Manchester and the Premier League.

Both sides had looked impressive up to that point, with new City boss Roberto Mancini finding a way to impose themselves games with a combination of Nigel De Jong’s physicality, Gareth Barry’s consistency, and David Silva’s artistry, before unleashing Yaya Toure to destroy stubbornly defiant opposition.

Manchester United, meanwhile, had started to experiment with a double pivot of Tom Cleverley and Anderson in the base of their midfield, after beating City in the Community Shield. With United down 2-0, Cleverley had replaced Michael Carrick at half time in that game, Carrick unable to control the midfield at all, and during the second half, it was Cleverley who had impressed, leading to a 3-2 win for United.

Cleverley - who never again reached the heights of those glorious two months - did not start in the 6-1 defeat at Old Trafford, and for a time it appeared as though City were going to run away with the title. Silva and Toure, in particular, seemed to have the tools between them to break down any resistance, Joe Hart in goal demonstrated why he was England’s best, while Sergio Aguero looked unstoppable, even if his finest moment was yet to come.

City, however, appeared as if they were about to do a City, starting a poor run of form that allowed United to reel them in, and at one point go eight points clear. Younger fans may not understand how for the longest time, Man City were never seen as anything more than a joke, that they would always find a way to shoot themselves in the foot from any winning position.

It was once even reported that Oasis frontman Liam Gallagher once turned down the opportunity to buy Manchester City during their days in the lower leagues, stating that leading them to success was harder than “nailing jelly to the ceiling.”

It was fortunate, then, that there was no opportunity to look back in anger for Gallagher and the other City supporters as the season drew to its incredible finale.

City were ahead of their rivals, and going into Matchday 38 City where just ahead on goal difference, and due to play Queens Park Rangers, desperate to avoid relegation. United, meanwhile, were away at Sunderland, who themselves had nothing to play for. The scene was set.

At 1-1, A series of on-field assaults by QPR’s Joey Barton looked to have swung the title in City’s favour, but even with the sending-off, QPR was able to take the lead, hanging on until injury time.

Manchester United’s game at Sunderland had finished, and with City needing to score twice against a resolute QPR side, it appeared that Sir Alex Ferguson had somehow pulled a 20th Premier League trophy for the Red Devils.

Still, City was behind, and while United waited nervously, they were still on course for being champions. City had next to no time to pull it out of the fire, and the trophy was being readied to be presented to United at the Stadium of Light.

It was Aguero proved to be City’s light in their darkest hour, providing one final twist in the tale, the man of the hour, or moment. The move started from deep in their own half, Nigel De Jong collecting and striding forward, before the ball found its way towards the box. Mario Balotelli fed Aguero, and with a disguised touch, he made room for himself and fired home. 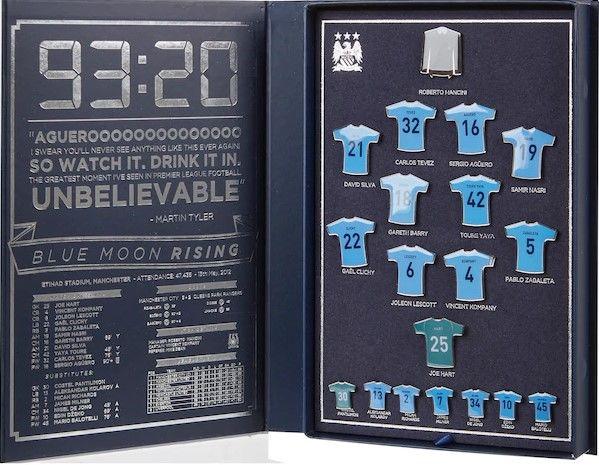 Manchester City recognizes the moment as 93:20, though certain sources call it a 95th-minute winner. It is a testament to the eminence and grandeur of the moment that so many can picture the goal so clearly even now, almost 8 years later.

The touch, the shot, the shirt coming off as he spins away. Joe Hart sprinting off, arms outstretched, fists clenched. Mancini leaping to his feet. Fans grabbing each other, in tears, others mirroring the players in sinking to their knees in ecstasy, in exultation, in sheer emotional exhaustion.

It was incredible, in every sense of the word, and it was a goal that sent shockwaves around the world of football. It was drama beyond words, it was a story you could not script, it was a moment that would never be forgotten, and for anyone involved - Blue, Red, or neutral - there has never been quite another moment like that one in 2012.