Follow all the action from Liverpool Vs Norwich via beIN CONNECT

Liverpool kicked off the new Premier League season with a convincing 4-1 victory over Norwich City at Anfield on Friday.

Last season's record-breaking runners-up Liverpool wasted no time in setting about getting maximum points, with Mohamed Salah and Virgil van Dijk adding to Grant Hanley's comical own goal within the opening 30 minutes.

Divock Origi made it four in the 42nd minute on his 100th Reds appearance but Jurgen Klopp's side were unable to add to their tally and Teemu Pukki netted a consolation strike for the newly promoted side.

However, the real sour note for Liverpool was the loss of goalkeeper Alisson, who had to be replaced by debutant Adrian in the first half after appearing to sustain a hamstring injury taking a goal-kick.

Liverpool got off to a flying start when Origi's cross from the left wing was diverted into the back of the net by Norwich captain Hanley in the seventh minute.

Marco Stiepermann wasted a second decent chance to get the Canaries on the board and they were punished when Roberto Firmino teed up Salah to slide a cool finish past Tim Krul.

Norwich continued to threaten but Van Dijk made light work of shaking off Jamal Lewis to power in a header from Salah's corner.

Despite losing Alisson to injury, Liverpool remained in the ascendancy and took a four-goal lead into half-time when Origi nodded Trent Alexander-Arnold's fine delivery home.

Krul tipped a shot from Jordan Henderson onto the crossbar early in the second half and, after Salah kept the ball alive and played in Alexander-Arnold with a delightful backheel, Firmino was unable to convert from the England defender's cutback.

Moritz Leitner rattled the upright with a swerving effort as the Canaries regained some courage and they were rewarded when Pukki found the bottom-left corner from Emiliano Buendia's incisive throughball.

Alexander-Arnold's powerful free-kick was saved well by Krul in the 85th minute and Adrian kept out Onel Hernandez in stoppage time as Liverpool comfortably saw out a routine victory.

Goal! Norwich pull one back! It had to be Teemu Pukki, a tidy "Finnish" from the striker!

Goal! Farke me! It's 4-0! Trent Alexander-Arnold knocks in a perfect ball to Divok Origi, who heads home! 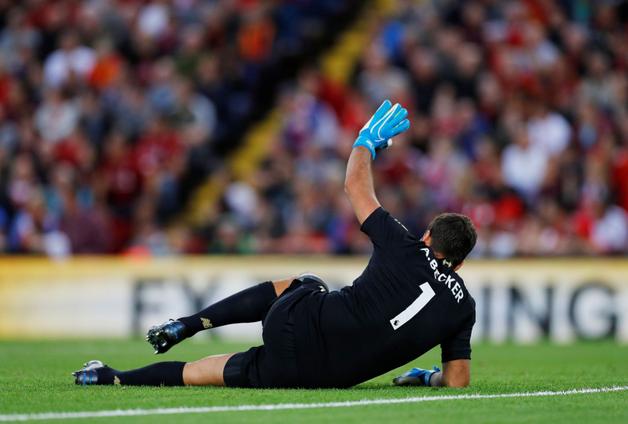 That doesn't look good for Liverpool! Goalkeeper Alisson comes off with an injury. Summer signing Adrian comes on for an unexpected debut!

Goal! Salah drifts in a corner and van Dijk heads Liverpool 3-0! This is far too easy for the Reds!

Goal! Firmino plays in Mohamed Salah who makes no mistake! Liverpool 2-0 up and running!

Peep! Away we go!

Don't forget we have VAR to deal with this season! How will it that go down? Right, ten minutes away from kick-off!

Time to be brave for Norwich, as they arrive at Anfield. Even more daunting for Daniel Farke, will be that his side will be facing the Euopean Champions!

Liverpool look relaxed ahead of the season opener! We are just under 30 minutes away from game time!

Don't worry! We have you covered here at beIN SPORTS! Our man Matt Critchley will be at Anfield covering all the action! Don't forget we are underway at 22:00 Mecca!

That's right, the #PremierLeague is back 🙌@MattCritchley1 sits in the @LFC changing rooms ahead of all the action this evening 💪#PL #beINPL #LIVNOR pic.twitter.com/SQb6NPN29G

This should get you in the mood Liverpool fans! I wonder if Mohamed Salah will get on the score sheet tonight?

Farke's young side will be looking to cause an upset against the Premier League title, just imagine if the Canaries can pull off a shock this evening!

25y 89d - This is Norwich City's youngest starting XI in a Premier League match since April 5th 1995 (25y 52d vs Leicester City) - younger than any of their starting XI's in their last five seasons in the top-flight. Blueprint. pic.twitter.com/sVNI8HMpdX

So here we go! Team News time! First Up, Liverpool! As expected Divok Origi starts in attack, whilst Sadio Mane who only returned to training earlier this week makes the bench, as does new signing Adrian. Joe Gomez also starts alongside Virgil van Djik in defence.

Our first line-up of the new @premierleague season 👊 #LIVNOR

Fancy a pre-match preview to get you excited? Have a bang on this.

What a huge opening day for Norwich, who took the Championship by storm last season! Will these fans be leaving Anfield happy tonight?

WE GO AGAIN! That's the rallying cry from me tonight, as the Premier League bursts into life. Liverpool went so close to the title last season, can they start off with a win tonight against Norwich?

Football is BACK at Anfield 😍

Good evening! Here we are again, after a summer of never-ending football, the Premier League is back! Liverpool take on new boys Norwich in the Friday evening game. Can Klopp's side hit the ground running, despite having a number of key players taking part in the Copa America and African Cup of Nations? Or will Daniel Farke inspire Norwich to a shock opening day win at Anfield? Join me for all the build-up, team news and live video highlights of the goals as they go in!