Liverpool fans have had plenty of goal-scoring idols to fawn over during the Premier League years.

There’s been the local hero in Robbie Fowler, the ‘Toxteth Terror’ whose working-class roots made him so relatable to many on the Kop. There was also Fernando Torres who captivated the hearts of Anfield before breaking them to join Chelsea in 2011. What about Luis Suarez? The Uruguayan scored plenty of memorable goals for Liverpool, before leaving for Barcelona. All of those no doubt left their mark but Mohamed Salah has left them all trailing in his wake.

Salah’s strike in the 2-1 win over Bournemouth brought yet another milestone in his already storied Anfield career, as he made it 70 goals in 100 Premier League appearances. Comfortably the most prolific Liverpool forward in the Premier League era, only Alan Shearer (79) scored more in his first centenary than the Egyptian:

Just look at those tables. Some of the Premier League’s most feared marksmen are on there and Salah has stormed past them in less than three seasons.

Not only that Salah became the first Liverpool player to score 20+ goals in all competitions in three successive seasons since Michael Owen in 2002-03. The numbers alone are enough to suggest he rightly deserves to be considered among the Premier League greats.

What sets Salah apart from the rest is his ability to cut in from the right flank and create space for his fellow attackers. His partnership with Trent Alexander-Arnold out wide has also paid rich dividends for a Liverpool side 25 points clear at the top of the Premier League table.

For all of the extraordinary feats, however, Salah has faced regular criticism from pundits and even fans online. Some feel the Egypt frontman has shown glimpses of selfishness and wastes too many chances when through on goal. Others have even suggested that Jurgen Klopp should sell Salah and replace him with Jadon Sancho. 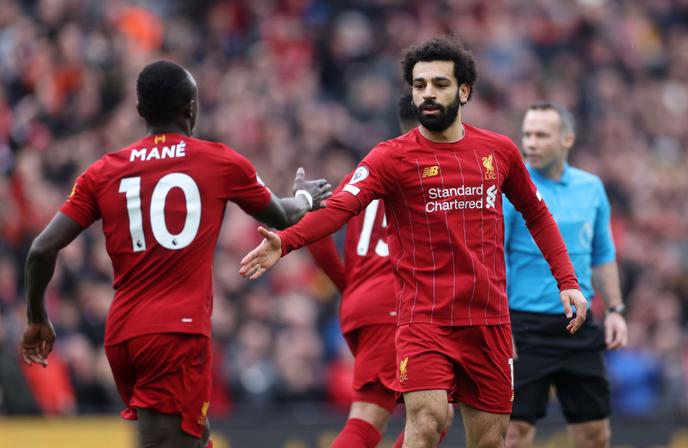 Such allegations seem a little off the mark. Since signing from Roma in 2017, Salah has regularly raised the bar so high, especially in his debut season when 44 goals in all competitions helped propel Liverpool to the Champions League Final. That remarkable season also earned him the PFA Player of the Year and African Footballer of the Year awards.

Lionel Messi and Cristiano Ronaldo aside, not many elite footballers have maintained such high levels of consistency, yet Salah currently stands just 9 goals away from reaching a century for Liverpool in all competitions. Not bad going for someone who is often accused of being so wasteful in attack.

Having already won the Premier League golden boot in each of the last two seasons (albeit sharing last season’s prize), only Jamie Vardy (19) and Pierre-Emerick Aubameyang (17) have netted more than Salah’s 16 league goals in 2019-20. Whenever the campaign does resume you would certainly not back against the Egyptian king to finish top of the scoring charts once again.