A goal in either half from Marcus Rashford ensured it was an unhappy return to Old Trafford for Jose Mourinho, as Manchester United ran out 2-1 winners against Tottenham on Wednesday evening.

Rashford took full advantage of United’s blistering start, firing the Red Devils into an early lead with the game just six minutes old. Jesse Lingard guided the ball into the path of the United striker who launched a blistering shot from a tight angle that beat Paulo Gazzaniga far too easily at the near post.

Spurs had been on an undefeated streak of three games in all competitions, prior to the game but looked second best in the early exchanges. Rashford, in particular, looked lively and could have quickly added to his tally, had his swirling long-range strike not struck the woodwork.

For all their lack of thrust in the attack, Tottenham did restore parity with six minutes left in the first half. Dele Alli has been the main beneficiary since Mourinho took over the side, and the England international levelled the score with a goal of sublime individual quality. A perfect first touch to kill the ball from the sky, before turning and guiding the ball into the corner out of the reach of de Gea.

However, minutes into the second half and Rashford scored his second from the penalty spot in a goal all of his own making. After being bundled down by Moussa Sissoko, United’s number ten stepped up and promptly planted the ball past Gazzaniga. The win means that Ole Gunnar Solskjær’s side now moves up into sixth place in the league.

Peep! All over at Old Trafford! Not a happy return for Jose Mourinho, as a brace from Rashford, gives Manchester United all three points!

Goal! Manchester United retake the lead minutes into the second half! Marcus Rashford is fouled by Moussa Sissoko, Rashford steps up and guides the ball into the corner! 2-1 United!

Peep! All level at the break! United was in control before Dele Alli's stunning leveller makes it 1-1!

Woodwork! Rashford rattles the crossbar with a long-range strike! Gazzaniga was well beaten there!

Daniel James takes a tumble on the sidelines and nearly takes Mourinho down with him!

Goal! Marcus Rashford smashes United into an early lead, Rashford strikes from a tight angle and Paulo Gazzaniga is beaten far too easily at the near post!

The teams are out at Old Trafford!

He's made a sensational start to life under Mourinho... Can Dele Alli be the difference-maker tonight? We get underway in just under ten minutes!

What a dynamic duo!

How good is it to see these two back at #MUFC for #MUNTOT? 🙌 pic.twitter.com/FiihM0inI1

Now for Spurs! Two changes from the side that won against Brighton, Harry Winks and Lucas Moura come in for Tanguy Ndombele and Eric Dier.

Team news! Four changes for  Manchester United from that side that drew with Aston Villa. Jesse Lingard, Ashley Young, Mason Greenwood and Scott McTominay come into the lineup!

🚨Here's how #MUFC will line up for #MUNTOT 👇

Just under thirty minutes till kick-off now! Team news is incoming! Ahead of that! Why don't you have a gander of our preview, which includes predicted teams and all the streaming information you will ever need! 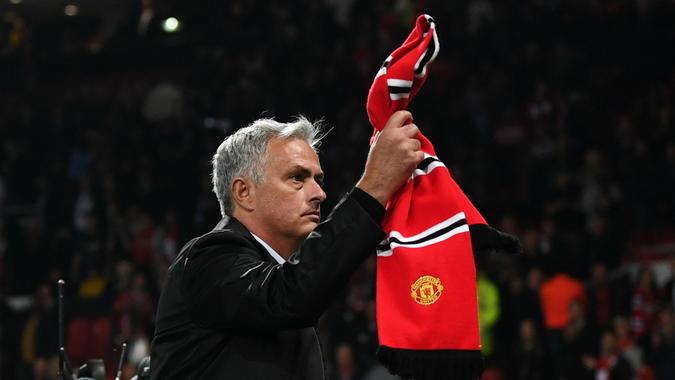 Hugs and smiles as Jose makes his return to Old Trafford!

We asked you about the game tonight, and most of you see Jose coming away with a famous win from his former employer!

#MUNTOT poll: 🤔 Will #Mourinho return to Old Trafford with his #THFC side and claim a positive result? #PL #beINPL

Old Trafford under the lights is a sight to behold! Don't forget the game gets underway at 22:30 Mecca!

So here we go! The return of the special one at Old Trafford, this slick video should get you in the mood for the action!

Good evening! Welcome to the Live Updates of Manchester United Vs Tottenham. It's time for a seasonal round of midweek games, which sees Jose Mourinho return to Old Trafford, with the pressure rising on current United boss Ole Gunnar Solskjær. Will the special one guide Spurs to a fourth straight win in all competitions or will United spoil the party? As ever, join me for live updates, team news and all-important goal highlights from the game.