Everton defender Michael Keane has hailed summer signings James Rodrigez, Alan and Abdoulaye Doucouré and how their immediate impact has helped the Toffees become early leaders in the Premier League.

"They have given the lads confidence, given the whole place a boost. They settled in straight away we started really well at Spurs with a great performance and a big win."

Four wins from four means that Everton are leading the way at the international break, and for Keane, he believes the summer signings have contributed to the winning feeling at the Merseyside club.

"Luckily we have been able to carry that on, we have been working hard on the training pitch and when you are winning every game it's a special feeling around the place. It's something you want more and more of."

A few eyebrows were raised when Colombian international James Rodrigez signed on in the summer, seemingly convinced by blues boss Carlo Acholotti. However, the playmaker has taken to life to the Premier League, scoring three goals in four starts. 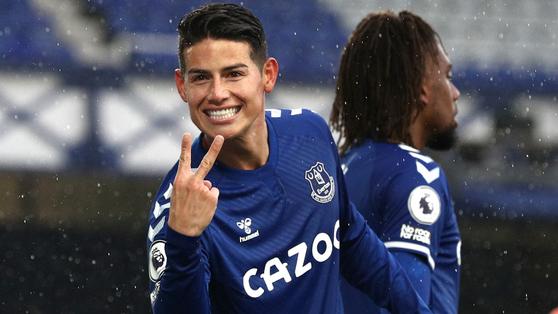 "James has got the ability, the passing, his first touch, his goals he creates a lot of chances for the team. He helps us get up the pitch and keeps the ball in tight situations."

"Alan and Doucouré are the legs in midfield, and they break up the play. They have made a big difference for us. Whilst the lads that have come in when they have not played have been brilliant. So as a squad everyone has raised their game and made us all improve."

Keane was also eager to praise Carlo Ancholotti and admitted that the veteran Italian boss sat him aside to talk about his own defensive game.

"Some of the names he pulled out! Cannavaro, Maldini, Nesta. I was just thinking wow, for me to work with him it's unbelievable to learn every day of him. He's won it all and coached the best players in the world."

Despite leading the way, the central defender was eager to point out that Everton are not getting carried away with their current position in the table.

"It's been a great start, but that is all it is. We are enjoying being at the top, as anyone would. It's only been four games, let's see how we are in a couple of months and that will give us a really good picture of where we are at as a team."

"We are feeling confident that we can achieve something this year."

Keane, who is currently on England duty was asked about how the team was in light of Jadon Sancho, Tammy Abraham & Ben Chilwell all missing the game against Wales for breaking COVID-19 rules.

"A few lads have made a few mistakes and apologised for that. As a group, we have been reminded of our responsibilities and are fully aware of that. It's important to keep a good relationship with us and the fans."

Keane added that Gareth Southgate had spoken with the side following the incident, reminding the whole squad of their responsibilities as England players.

"It wasn't a telling off. It was a reminder, a conversation between us all. We know what playing for England means and the spotlight that puts on you. There are also new faces who haven't been here who don't know that, or haven't been told that. It was a gentle reminder, and I am confident nothing will happen again."

You can hear more from Michael Keane in the video above.