We’ve already eulogised at great length about the feats of Thierry Henry at Arsenal elsewhere. But the man who va-va-voomed his way into Premier League greatness broke a number of records along the way, and left his mark on the English game.

For starters, the Clairefontaine graduate sits top of Arsenal’s all-time top scorers' list with 228 goals in 337 appearances, some 43 goals clear of second-placed Ian Wright (185) who he overtook in October 2005: 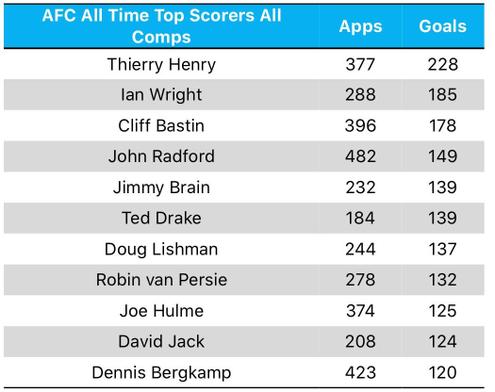 In his pomp, Henry broke the 30-goal mark in five consecutive seasons for the Gunners as they won two Premier League titles, three FA Cups and reached a UEFA Champions League final during the Frenchman’s peak years. Not bad considering he started out as a winger.

In the Premier League, Henry had few equals. His 175 goals in 258 top-flight games leave him 6th in the competition’s all-time top scorers, and his eight hat-tricks are only bettered by Robbie Fowler (9), Alan Shearer (11) and Sergio Aguero (12): 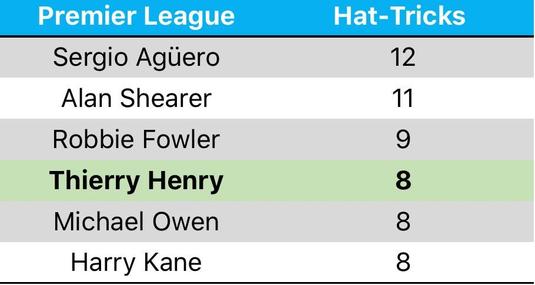 With an astonishing 122 minutes per goal, only Sergio Aguero (107) has been more clinical throughout the Premier League years and is further testament to Henry’s technical perfection.

A four-time Premier League golden boot winner, Henry also captured the European golden boot in consecutive seasons in 2003-04 and 2004-05, the former of which came thanks to a stunning 39-goal season when Arsenal’s ‘invincibles’ claimed the Premier League title.

The impressive stats don’t stop there. Henry’s 114 Premier League goals scored at Highbury is a competition record for most goals scored at a particular venue, and his treble in the stadium’s final game against Wigan Athletic was the perfect parting gift:

Such remarkable stats add further weight to claims that Henry should be regarded as the one of the Premier League’s greatest ever strikers.

Next Thierry Henry at Arsenal - an Invincible Who Becam
Read