One of the most iconic goals EVER scored! ⚽ pic.twitter.com/dUp0wBMJJs

There are few better ways to announce your arrival on the big stage than to score from your own half during the first game of the season. The strike that would later be called the best-ever opening day goal in Premier League history has gone down in folklore as the moment that launched David Beckham caree, such an iconic moment all but earmarked the Englishman for superstardom. Few would have predicted the heights he would reach, however.

As an impressionable young football fan growing up in Southeast Asia, just about every one of my peers fell into one of two categories; those who had been conditioned to support Liverpool by their fathers and uncles who had adopted the side as their own during their successful 70s and 80s.

Or those who had decided that Manchester United was their side, with a crop of young and stylish players who had begun to take control of the English game, alongside older, even more, stylish veterans.

There was also a smaller group of Arsenal supporters, but we usually only laughed at them. I was part of the United-supporting faction of youths in Singapore, spending so many weekend evenings watching Premier League and FA Cup coverage, invariably anchored around the exploits of the Red Devils and their talented side.

David Beckham in particular resonated with the teenagers of the time, being a young and good-looking English winger who had a penchant for scoring spectacular goals.

I was always more of a fan of Ryan Giggs, but Beckham’s influence was undeniable, seen in every street corner and schoolyard football pitch, and just about every barbershop and hairdresser, his floppy-haired look mimicked by anyone and everyone trying to aspire to be like Manchester United’s no. 7 (though he was wearing the 10 shirt when he scored that lob against Wimbledon).

I could not tell you how many friends and schoolmates got into trouble with teachers because of this very fact, with strict guidelines in place for how long a boy’s hair was allowed to be and how much dye could be present (none).

All those Southeast Asian teenage boys just wanted the centre-parted blond-streaked look that had landed him a Spice Girl on top of his trophies and accolades. If he had achieved nothing else, he would have already been forever known as a hero.

He did, of course, achieve more. 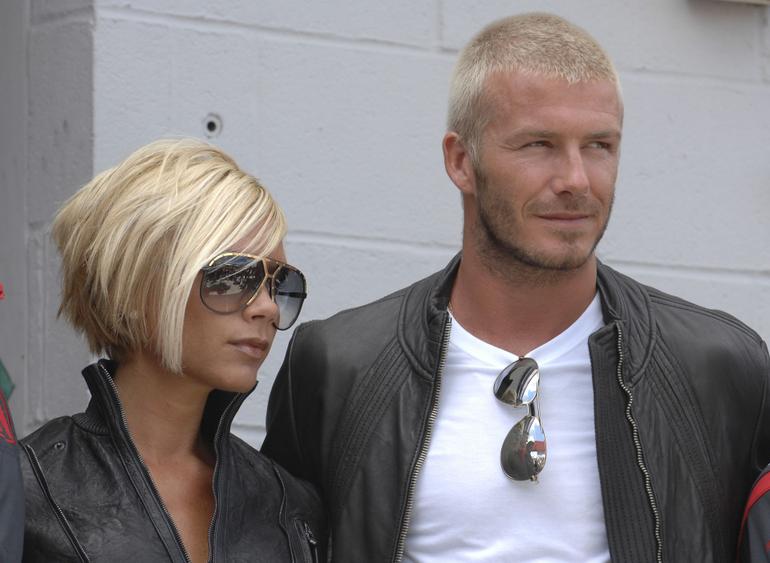 Marrying Posh Spice Victoria Adams shortly after the momentous Treble season of 1999, Beckham went on to collect even more medals, selling more merchandise, and breaking into other markets.

Becoming the focus of sportswear manufacturer Adidas’ branding campaign, Beckham became a brand onto himself in short order, appearing in commercials and advertisements for everything ranging from hair gel to cologne, high-end fashion to electronics, underwear to soft drinks.

The 2002 film Bend It Like Beckham was not quite about him at all, but the fact his name is used in the title of the surprisingly successful film (starring a young Keira Knightley) is testament to how he had already permeated society on every level, becoming a household name in almost every sense of the word.

There has not been a “Go Like Giggs” or “Run Like Ronaldo” film, at least not one that has touched and resonated with as many people around the world.

Beckham’s public feud with Sir Alex Ferguson in 2003 may have driven a wedge between himself and some fans of the club, but by then there were legions of fans of Beckham himself, including many of the people around me. Standing up to the establishment, going against a revered authority figure, being a rebel while still actually being an important part of a title-winning side? His popularity surged.

In a way, what Beckham was doing transcended everything we knew beforehand. There were of course stars before him, with one Brazilian, in particular, skyrocketing into fame and fortune around the turn of the century.

Here was David Beckham, a midfielder with those devastating good looks and a celebrity wife, taking the world - not the footballing world, but the entire world - by storm. He would in many ways surpass the levels of the Nike-sponsored Ronaldo, much to the glee of Adidas, and by the time his Manchester United career drew to a close, his public image was as important and marketable as any facet of his football.

Signing for Real Madrid that summer, Galactico Beckham barely needed more exposure, but here it was. The Beckham brand, coupled with Real Madrid’s global appeal, was a match made in heaven, and both sides of that transaction enjoyed that particular relationship.

That particular season was less than successful for Beckham and Real, but his popularity and influence continued to soar off the pitch, being named alongside individuals like Bill Gates, Vladimir Putin, J.K. Rowling, Nelson Mandela, and Bono in Time Magazine’s list of the 100 most influential people in the world.

His move to LA Galaxy and the MLS gave North America their first taste of the furore around David Beckham, the transfer coinciding with a television show about the family’s move to America as well. Appearing on talk shows as often as he attended training, Beckham celebrity status exploded in a way that few predicted, even as his footballing prowess may have been on the wane.

Still, even on his worst day he was very much a very good player and by now the once boyish good looks had given way to a refined visage that sported tattoos and perfectly-sculpted facial hair, again a look that boys (and men) the world over began to desperately mimic.

Stints in Milan and Paris followed, with a Ligue 1 title to add to trophies in England, Spain, and America. Having been the closest player to a trinity of Premier League, La Liga, and Serie A titles (finishing second in Italy with Milan) until Cristiano Ronaldo actually achieved it with Juventus last season, Beckham’s accomplishments on the pitch are staggering, and perhaps only augmented when one looks at how active he has been off it, be it as a philanthropist, developer, or even would-be movie star.

Having retired from playing in 2013, Beckham still commands an astounding following, with over 62 million fans on Instagram alone (a popular video from his son Brooklyn bragging about his own number of followers was once famously crashed by the elder Beckham, putting him in his place).

To put that into perspective, the official Manchester United account has just over half as many fans as Beckham’s, and even that number added to his last club Paris Saint-German’s following will still not match Beckham’s horde of loyal devotees.

Before social media and likes, there were stunning goals and lobs. Before Posh Spice and movies, there were Premier League titles and FA Cup medals. Before talk shows and hair products, there were talismanic performances and heroics.

The man and the brand that is David Beckham has been and will be a different thing to just about everyone in the world, with some harkening back to the young man with the golden locks, clad in a loose-fitting red jersey.

Others think of the smouldering looks to the camera in Calvin Klein posters. But be it football, film or fashion, in Manchester, Madrid, or Milan, David Beckham has undoubtedly been a force upon society and culture, starting out as one of the faces of football.