The Chicago Blackhawks forced a seventh and deciding game against the St Louis Blue after completing a superb 6-3 comeback win in their first-round NHL Stanley Cup play-off series.

Stanley Cup holders the Blackhawks were 3-1 down at the end of the first period after Andrew Ladd had given them an early lead, but went on to triumph thanks to five unanswered goals as the defending champions levelled the Western Conference series 3-3 in Chicago on Saturday.

Scottie Upshall, Alex Pietrangelo and Vladimir Tarasenko - who scored his fourth of the series - overturned the Blues' early deficit to put themselves in a dominant position, but they failed to make the most of their advantage.

Goals from Artem Anisimov, Trevor van Riemsdyk and Dale Weise had the Blackhawks in front at the end of the second period, before a massive third-period shutout and late goals from Andrew Share and Marian Hossa ensured a seventh game.

The Pittsburgh Penguins issued another thrashing, this time 6-3, as they dumped the New York Rangers out of the play-offs inside five games in the best-of-seven Eastern Conference series.

The Rangers got off to a good start, taking a 1-0 lead through Rick Nash and went into the first break all square at 2-2.

But the Penguins were too good from there as a Ryan Bust brace and goals to Matt Cullen and Conor Sheary took the game away from the Rangers in the second period, sealing a 4-1 series success.

Elsewhere, the Anaheim Ducks took a 3-2 lead in their Western Conference series against the Nashville Predators after their 5-2 win at home.

The Ducks boasted five different goalscorers after going a goal down in the second to put them in the driver's seat as the series heads to a thrilling conclusion.

Next Islanders dump Panthers out of play-offs, Capitals
Read 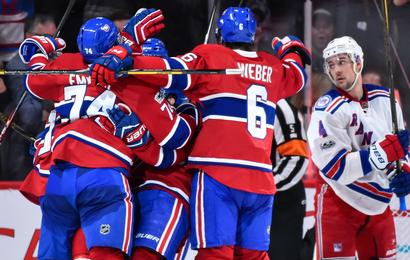