Paul George and Marcus Morris Sr. combined to lead the Los Angeles Clippers past the Detroit Pistons 131-124 in NBA action on Sunday.

Clippers star George posted 32 points – his third consecutive game of 30-plus points – as the Los Angeles franchise rallied for their fifth successive victory.

Morris put up a season-high 33 points for the Clippers, who capped a nine-game homestand against the lowly Pistons.

Veteran Morris nailed six three-pointers and surpassed 1,000 for his career as star Kawhi Leonard was rested.

Meanwhile, the Denver Nuggets had their eight-game winning streak snapped by the Boston Celtics in a 105-87 defeat.

The Celtics used a remarkable 31-3 run to take down the Nuggets on the road in Denver, where Jayson Tatum (illness) and Jaylen Brown (knee) battled to inspire Boston.

Denver led 79-65 late in the third quarter before capitulating, outscored 31-8 in the final period.

Nikola Jokic's triple-double of 17 points, 11 assists and 10 rebounds were not enough for the Nuggets.

Zion Williamson had 38 points as the New Orleans Pelicans rallied past the Cleveland Cavaliers 116-109. Williamson, who scored 25 points in the first half and fell one shy of his career best, made 16 of 22 shots, while collecting nine rebounds and tallying four assists.

Jonas Valanciunas produced a big performance, but the Memphis Grizzlies went down 132-125 to the Indiana Pacers. He recorded a career-high tying 34 points and 22 rebounds. Valanciunas posted his second career game with 30-plus points and 20-plus rebounds and is the second player in Grizzlies history with multiple 30-20 regular-season games after Zach Randolph (three).

Bogdan Bogdanovic finished with 32 points on a career-high eight three-pointers as the high-flying Atlanta Hawks defeated the Charlotte Hornets 105-101. Clint Capela added 20 points and 15 rebounds for the Hawks, who are fourth in the Eastern Conference.

DeMar DeRozan registered 33 points, including the tie-breaking jump shot with 0.5 seconds remaining, to lift the San Antonio Spurs to a 119-117 win against the Dallas Mavericks.

Game to forget for Magic

The Orlando Magic have not had much to celebrate this season and they had a tough time against the Milwaukee Bucks, who won 124-87. All five of Orlando's starters did not reach double-digit points. James Innis III was two-for-seven shooting, while missing all three attempts from beyond the arc for six points in 25 minutes. In total, the Magic were just 22.2 per cent from three-point range.

In a scene reminiscent of iconic 1990s movie Space Jam, Hornets star Miles Bridges channelled his inner Michael Jordan with a thunderous slam against the Hawks.

The Eastern Conference-leading Philadelphia 76ers (36-17) will be eyeing back-to-back wins when they face Luka Doncic's Mavericks (29-23) on Monday. 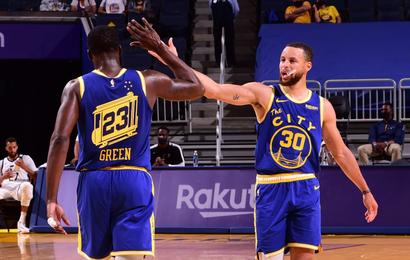