The teams split the first two games in Philadelphia, but the Sixers dominated Friday to grab a 2-1 series lead and halt the Hawks' 13-game winning streak at home.

Tobias Harris scored 22 points, Ben Simmons tallied 18 points and seven assists, and Furkan Korkmaz drained three of six from beyond the arc for the 76ers in front of a crowd of 16,400 at State Farm Arena in Atlanta.

Embiid had a couple of hard falls during the contest but nothing serious.

"I'm OK," said Embiid, who is playing with a cartilage tear in his right knee. "I'm standing up. I'm walking. I finished the game. So I'm gonna keep getting back up. I'm going to keep fighting. That's been me since I've been playing basketball."

Philadelphia shot 52 percent overall and an impressive 47 percent from beyond the arc, making 10 of 21 compared to Atlanta who made just six of 23.

"I was just trying to push the pace and get in the lane, stay aggressive and get to the rim, get into a rhythm," Simmons said. "I think I did a good job of that in the second half."

The Sixers also once again contained the Hawks' rising star Trae Young, who finished with 28 points in 37 minutes of playing time. John Collins scored 23 points and Clint Capela had eight points and 16 rebounds in the loss.

The Sixers seized command in the third, outscoring Atlanta 34-19 and extending their lead to 20 points heading into the fourth.

Philadelphia roared out of the halftime break, making their first eight shots of the third quarter to build an 80-62 lead.

Seth Curry highlighted their 19-6 scoring surge by nailing a three and a pair of short-range jump shots.

Elsewhere, Devin Booker scored 28 points and Chris Paul added 27 and eight assists as the Phoenix Suns seized a commanding 3-0 lead over the Denver Nuggets with a 116-102 victory.

"We are peaking at the right time. The regular season prepared us for these games," Booker said.

Deandre Ayton had 10 points and 15 rebounds, Jae Crowder scored 14 and Mikal Bridges added 11 for Phoenix, who can sweep the best-of-seven series on Sunday in Denver.

"It is not going to be easy," said Crowder of the possible close out game. "We expect their best, and we are going to give our best too."

Phoenix now has a stranglehold lead in the best of seven series and are just one win from reaching the NBA semi-finals for the first time since the 2009-10 season.

Nikola Jokic, who received his MVP award before the game, had 32 points, 20 rebounds and 10 assists for the Nuggets but didn't get a lot of help from his supporting cast. Monte Morris scored 21, Michael Porter had 15 and Will Barton added 14 in the loss.

The Suns never trailed after being down 3-2. Phoenix charged out to a 21-8 lead early and was up 37-27 after the first quarter. Denver scored the final six points of the half to trail just 59-55 at intermission.

Phoenix began the final quarter by scoring the first six points to lead by 20 with 10:17 left.

"It was a great crowd. These playoff games have a higher intensity, and they are more physical," said Booker. 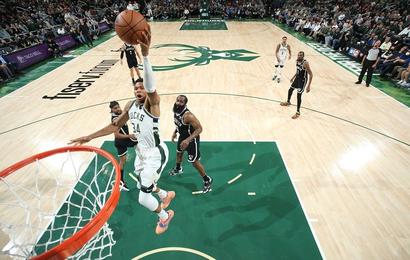