Four-time NBA all-star Joel Embiid scored 43 points and grabbed 15 rebounds as the Philadelphia 76ers slipped past the Charlotte Hornets 127-124 in overtime on Monday.

Embiid contributed on each of the eight points the Sixers scored in overtime, scoring all but one basket and assisting on another.

Tobias Harris added 21 points and Shake Milton had 16 points in the win.

"He's so dominant out there, especially when he is able to get his position on the floor," Harris said of Embiid. "He's able to punish a team. They threw different guys at him, but he's so much bigger and stronger."

Kelly Oubre delivered 35 points, shooting 13-of-24 shots from the field, including six threes for the Hornets.

P.J. Washington and Miles Bridges both had 16 points and Cody Martin scored 14 points in the loss.

Charlotte played short-handed for the second night in a row. LaMelo Ball, Terry Rozier, Jalen McDaniels, and Mason Plumlee are in Covid-19 protocol.

In Milwaukee, Giannis Antetokounmpo, who turned 27 on Monday, finished with 27 points and 12 rebounds as the Bucks held on to beat the Cleveland Cavaliers 112-104.

Antetokounmpo returned after missing two games with a right calf injury. He played 27 minutes overall and scored 15 points in the final quarter for the Bucks, who have won 10 of their past 11.

Jarrett Allen had 25 points and nine rebounds to lead Cleveland.

Elsewhere, Zach LaVine scored a team-high 32 points to lead five players in double figures as the Chicago Bulls beat the Denver Nuggets 109-97 for their fourth victory in the past five contests. 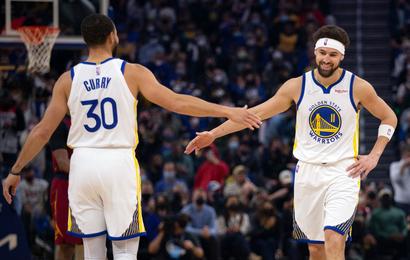