But even his relatively quiet night -- which also featured nine rebounds, seven assists and two blocked shots -- was plenty for a Sixers team that drained 13 three-pointers to the Lakers' six from beyond the arc.

"I was not very good tonight, so I was happy my teammates were able to pick me up," said Embiid, who did take his streak of games with at least 25 points to 16 straight.

With four-time NBA Most Valuable Player James, second in the league in scoring with 29.1 points per game, sidelined with a sore left knee, Anthony Davis did what he could to pick up the slack for the Lakers.

Davis, playing his second game since missing 17 with a sprained knee, scored 31 points and pulled down 12 rebounds for the Lakers in an impressive, aggressive performance.

But he had little support. Russell Westbrook added 20 points, but the remaining three Lakers starters combined for just 15.

Davis also got a scare, hurting his right wrist in the first half and playing with it taped the rest of the game.

"Anthony played a hell of a game on both sides of the ball," Lakers coach Frank Vogel said. "It was good to see him get a rhythm. (He) made some terrific plays on Embiid."

Vogel admitted it was frustrating to again find himself unable to get his star duo of James and Davis on the court at the same time.

"But this is what every team in the league goes through," Vogel said. "We have to play better than we played tonight."

The 76ers were missing injured Seth Curry and Shake Milton. But Tobias Harris contributed 23 points and Tyrese Maxey and Georges Niang scored 14 apiece for the hosts.

And after Davis scored 23 points in the first half, the 76ers made adjustments, and he was limited to eight after the break.

"Just try to be in his space," Harris said of the 76ers' strategy for slowing Davis. "He's such a tough player and a very good isolation scorer. Just being able to be physical when you have Joel rolling around on the back side as well that helps because he's looking at angles to get to the rim."

A couple of 76ers fans were escorted from the arena late in the game after comments directed at Lakers reserve Carmelo Anthony. Anthony was then involved in a heated exchange with a third courtside fan -- with Embiid trying to defuse the situation.

"Some things were said," Anthony said, declining to elaborate. "Unacceptable."

In the only other game on Thursday's slate, Stephen Curry shook off a sluggish start to score 29 points in the Golden State Warriors' 124-115 victory over the Minnesota Timberwolves.

Klay Thompson added 23 points for the Warriors and Andrew Wiggins scored 19 points and pulled down five rebounds against his former team.

Curry, the league's all-time leading three-point shooter, scored just eight points in the first half, but he warmed up and finished with six three-pointers on 10 attempts.

Thompson made five three-pointers and the Warriors withstood a 31-point, 12-rebound double-double from Karl-Anthony Towns. 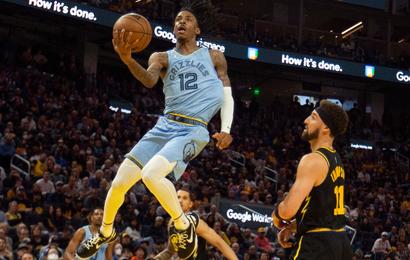