Alvaro Morata ensured Atletico Madrid got back to winning ways in LaLiga as Diego Simeone's side battled to a 2-0 victory over Osasuna.

A month had passed since Atleti's previous top-flight triumph over Espanyol on November 10 and the brilliance of Osasuna goalkeeper Sergio Herrera looked like spelling another frustrating outing at the Wanda Metropolitano.

But Morata dispatched an emphatic header midway through the second half to break the deadlock and Saul Niguez doubled the advantage 15 minutes from time.

Los Rojiblancos move up to fourth in the table, six shy of Barcelona after the leaders were held to a 2-2 draw at Real Sociedad earlier on Saturday.

Herrera began a busy first half by thwarting Morata at close quarters before the former Juventus striker turned provider and played in Joao Felix in the 23rd minute – the Osasuna keeper saving with his boot.

A double stop from Herrera spared Jagoba Arrasate's side 10 minutes from half-time, parrying a shot on the angle from Thomas Lemar and getting back into position to repel Koke's follow-up drive.

The pick of Herrera's work came in the 39th minute when, at full stretch, he turned Joao Felix's header from teenage debutant Manuel Sanchez's left-wing centre onto the crossbar.

He was not done there, keeping out Thomas Partey's rasping long-ranger and frustrating Joao Felix once more to ensure parity at the interval.

Morata got behind the visiting defence only to miss his kick woefully and Herrera's masterclass continued as he saved with his foot from Sanchez.

Trippier delivered a typically threatening set-piece from the right and Morata put his earlier profligacy behind him to power home.

Saul sealed the points in style, darting forward from the unfamiliar position of left-back to dink over Sanchez – Simeone letting out a guttural roar on the touchline.

What does it mean? Simeone's spluttering stars stay in the title picture

Clear vulnerabilities at Barcelona and Real Madrid this season have thrown up opportunities an Atletico side also in transition have failed to capitalise upon. They have still drawn more matches than they have won in LaLiga this season, but the obvious room for improvement and their proximity to the top of the table should be cause for mid-season encouragement.

It was easy to sense the belief draining from Atletico before Morata broke through, with much of that down to a truly phenomenal goalkeeping display in the visiting goal. Herrera's efforts as Atletico laid siege to the Osasuna area during the closing stages of the first half were out of the very top drawer.

To his credit, the prodigiously talented 20-year-old does not hide when things are not falling his way, but this became an increasingly frustrating outing for Joao Felix – the open spaces Atletico's record signing found earlier on turning into blind alleys before his 82nd-minute withdrawal. Nevertheless, his developing partnership with Morata could be a huge asset in 2020.

Atletico travel to Real Betis for their final game of 2019 next Sunday, while Osasuna host Real Sociedad after taking on minnows Lorca Deportiva in the Copa del Rey.

Previous The penalty on Pique is so clear! Busquets fumes a
Read

Next Joao Felix bringing a sense of danger to Atletico
Read 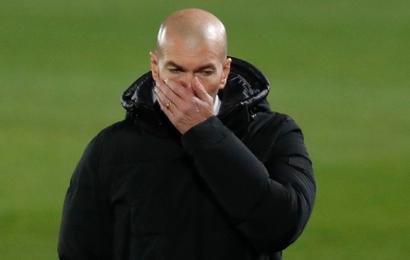