Few managers have ever divided opinion quite like Rafael Benitez.

Lauded by many as a tactical genius who got the best out of limited resources, there have been plenty quick to pour scorn on what they perceived as dour, lacking in style football. Upon his appointment as Liverpool manager in 2004, Benitez likened his teams to “the Milan of Arrigo Sacchi.”

Regardless of your viewpoint, Benitez’s impact was instant. Despite a poor league season that resulted in a 5th place finish, the unforgettable UEFA Champions League triumph in 2005 further enhanced the credentials of a man who led Valencia to two La Liga titles and UEFA Cup glory prior to his time in England.

For all of the superhuman efforts of his captain Steven Gerrard, Benitez’s tactical acumen never shone brighter than on the night of 25 May 2005. 3-0 down against AC Milan, a change of formation at half-time and the introduction of Dietmar Hamann helped stem the Milan tide, and allowed Liverpool to complete an incredible comeback to claim their 5th European Cup against all the odds. 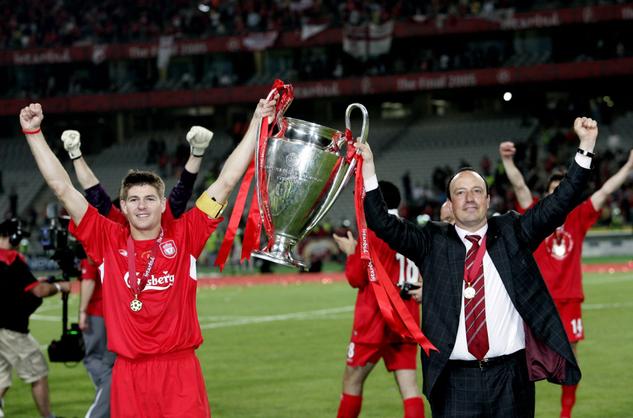 But it was in Europe where the Spaniard’s finest hours came at Anfield as a succession of European heavyweights were overcome in dramatic, and even sometimes brutal fashion. After a 4-0 thrashing of Real Madrid in March 2009, Liverpool were ranked No.1 in UEFA’s coefficient rankings.

Sadly near-misses and political turmoil curtailed Benitez’s final years on Merseyside. Milan gained revenge for Istanbul in the 2007 Champions League final, before a Premier League title challenge in 2008-09 ended in disappointment as Manchester United held off Liverpool. The following year saw a rapid decline in the club’s fortunes as the sale of Xabi Alonso and further debt contributed to a 7th place finish and Benitez’s ultimate departure.

After a short stint at Inter Milan and a break from the game, he shocked the football world when he was appointed interim manager at Chelsea in November 2012. A universally unpopular decision with the Stamford Bridge faithful, Benitez faced an uphill task from day one to gain any support due to previous comments made about the club when he was at Anfield. While his short stay in West London wasn’t without its low moments, a Europa League triumph and a top-four finish ensured some level of respect from those that initially voiced their displeasure at his arrival.

After further mixed fortunes at Napoli and Real Madrid, Benitez returned to England in March 2016 to take charge of Newcastle United. Despite a late-season rally, the Toon Army were ultimately relegated but an instant return to the top-flight was secured a year later.

Yet again, Benitez’s time in charge was blighted with boardroom rows over transfers and the lack of any budget. In spite of the turmoil, he led Newcastle to 10th and 13th place finishes even without a lack of real firepower in attack. History again repeated itself last summer when Newcastle and Benitez parted ways, with Mike Ashley stating ‘unfair demands’ from the manager.

Trouble and strife may never be far away, but there’s no denying the impact of Rafael Benitez on English football. His ability to galvanize a fanbase and give them hope in the face of adversity is arguably his greatest strength.