When Beckham signed for LA Galaxy back in 2007 for the highly lucrative $128 Million, 3-year deal, a clause was written into the Englishman’s contract which provided him with the option of purchasing his own ‘expansion franchise’ which he could action immediately after he had stopped playing.

Upon his retirement in 2013, two franchises presented themselves to Beckham. Don Garber, the commissioner of the MLS, wanted there to be a rival to the New York Red Bulls, but perhaps more interestingly, the untapped market of Florida, with Miami in particular. Ultimately Beckham opted for the latter, and when speaking in 2014 said "I want to make this my own team…We will bring great players in.”

Bringing an MLS Franchise to Florida and Miami had been tried before at the start of the century. Both Miami Fusion and Tampa Bay Mutiny endured promising starts but due to a combination of waning local interest and diminishing revenue, both franchises were folded in 2002 as the MLS sought to cut costs. However, thanks to the likes of Beckham and other high-profile imports from Europe, the MLS’ global profile is bigger than ever before. 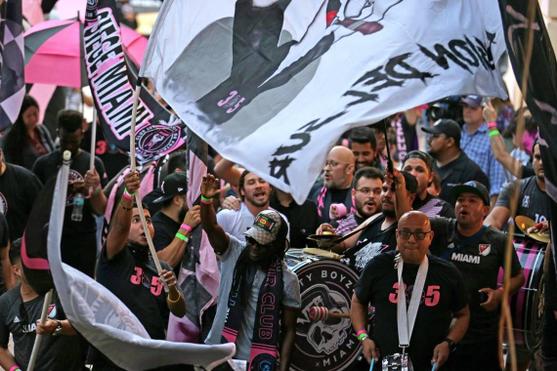 January 2018 saw the Miami Beckham group awarded the 25th MLS Franchise, set to kick off at the start of the 2020 season. The franchise was to be known as Club Internacional de Futbol Miami or Inter Miami, a nod to the predominantly Latino Miami community.

A community which has embraced the club with open arms. So desperate were fans from the area to have an MLS team to support, they flocked in their droves to support Inter Miami’s U13 and U14 sides –  complete with songs and drums!

For Beckham and supporters, it hasn’t been an easy journey. Fans will have to wait a little longer for a home of their own as Inter Miami’s ‘Freedom Park’ Stadium won’t be complete until 2022.

Until then they will have to make do with playing on the site of the old Lockhart Stadium in Fort Lauderdale. Furthermore, naming rights issues have presented themselves as Serie A side, Inter Milan have launched a legal battle over what they consider breaches in Trademark.

Despite all the hardships, Inter Miami finally played their first game in the MLS on the 3rd March this year against Los Angeles Football Club. It was a baptism of fire for the fledgeling side as they faced one of the league’s best sides from last season – former Arsenal and Real Sociedad star Carlos Vela chipped in with the only goal of the game, which subjected Inter Miami to their first defeat – yet there are many positives to glean from the first game in charge.

Very proud moment for our club today and the team did us proud... It’s been a long journey but this is only the beginning ... To Diego (The Boss) the team and our entire staff at @intermiamicf we should be very proud how far we have come and what the future holds... Exciting times ahead #VamosMiami

Taking to social media after the game, Beckham wrote ‘Very proud moment for our club today and the team did us proud... It’s been a long journey but this is only the beginning ... To Diego (The Boss) the team and our entire staff at @intermiamicf we should be very proud how far we have come and what the future holds... Exciting times ahead #VamosMiami

Besides a potential name change, what does the future hold for Inter Miami? “I think Miami needs a star,” Beckham said two years ago. “You have to realise the audience we have and Miami would expect us to bring in a star. That’s what we plan on doing.”

Names such as David Silva and Edinson Cavani are rumoured– yet they would not be available until their contracts end with Manchester City and Paris Saint-Germain in June respectively. With the current COVID-19 pandemic putting a halt to all top-level European Football, their contract terminations could coincide with the MLS resuming, yet with respects to the resumption of the leagues, the only certainty is uncertainty.

As is generally the case with many new businesses, Inter Miami will have to do more than just rely on supporter sentiment. Only through engagement with the local community can they expect to generate a loyal and committed fan base week in, week out.

With Inter Miami investing in world-class academies for young local players as well as promoting the youth sides, it would appear that steps are being taken in the right direction, yet with stadium uncertainties, fan’s patience could be tested before the club is allowed to gather momentum. But for now, whenever football returns, all the fans will be there ready to celebrate Inter Miami’s first MLS goal.