Does anybody remember that time Cristiano Ronaldo scored a goal? Any goal? It’s easy. Practically every week. What may be more difficult is remembering exactly when the five-time Ballon D’or winner has broken another record.

March 24th, 2012 was a day of personal triumph for Ronaldo, and a record that may takes decades before it’s ever broken again. 100 La Liga goals, hitting that milestone faster than any other player in Real Madrid history.

Ronaldo was in his third La Liga season, having joined Real Madrid from Manchester United in a July 2009 deal worth £80 million. He scored 26 league goals that first season, then 40 in the next. Despite that prolific return, however, Madrid finished as runners-up to arch-enemy Barcelona both seasons. 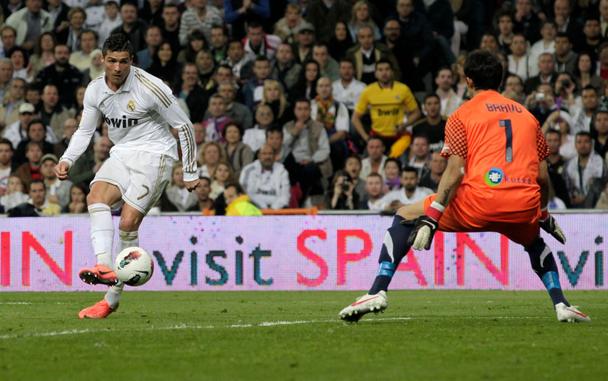 For match number 29, Madrid hosted Real Sociedad at the Bernabéu and took the lead with a sixth-minute goal from striker Gonzalo Higuaín. Then in the 32nd minute, Ronaldo received the ball on the left and raced past the defence, and sent a right-footed shot just inside the far post.

Scoring his100th La Liga goal in just his 92nd game, beating the previous club record of Ferenc Puskás, who needed 105 games to get to that mark. But it fell just short of the overall record, set by Real Oviedo's Isidro Lángara, who did it in 90 games.

Ronaldo went on to score a second as Madrid won 5-1. March 24th, 2012 entered him into the illustrious list of La Liga centurions.

Goal-hungry as ever, he also scored Madrid’s 100th league goal that season in an eventual total of 121. Ronaldo ended up with 46 goals in La Liga, 60 in all competitions and he, Mourinho and company proceeded to wrestle back the league title.