Mesut Ozil led the calls for Joachim Low to bring back Jerome Boateng after Germany were thrashed 6-0 by Spain on Tuesday.

The 2014 World Cup winners suffered the biggest competitive defeat in their history as they missed out on a place in the Nations League Finals.

Ferran Torres scored a hat-trick and there were further goals from Alvaro Morata, Rodri and Mikel Oyarzabal in Seville as Spain produced their finest performance under Luis Enrique.

Germany managed just two shots, neither of which were on target, and had only 30 per cent of the ball as they were led a merry dance by a home side who lost captain Sergio Ramos and Sergio Canales to hamstring injuries in the first half.

The manner of defeat will see Low's position as head coach come under more scrutiny, with Germany having failed to kick on sufficiently since the 60-year-old made the ruthless decision to remove Boateng, Thomas Muller and Mats Hummels from his plans following their group-stage exit at the 2018 World Cup.

Arsenal midfielder Ozil, who retired from international football that same year, brought Low's decision sharply back into focus after the chastening outing in Spain.

"Time to take Jerome Boateng back," he tweeted, tagging the account of the national team in his post.

The nature of Germany's collapse against Spain was more concerning given they only needed a draw to secure a spot at next year's Nations League final four.

Team director Oliver Bierhoff was deeply concerned by the defending on show but insisted Low had their support.

He told ARD: "We have to digest that. It will take a while. The team fell apart, which can't be allowed to happen. There is no excuse for it, but it happens when a team can't get a foothold at all.

"The Spain goalkeeper had nothing to do in the whole game. We have to analyse it as harshly as we can. A lack of experience is no excuse.

"We have to bring an end to the many organisational problems in defence. We know the quality of our players.

"The trust in Joachim Low is there, absolutely."

Next Morata shrugs off critics after historic Spain win
Read 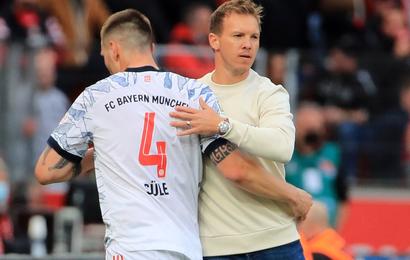