It was the improbable level of fine-tuning that made Gabriel Jesus' early opener in Manchester City's 1-0 FA Cup semi-final win over Brighton and Hove Albion so delightful.

Aymeric Laporte judged the flight and weight of his cross-field pass to perfection. Bernardo Silva's cushioned first-time lay-off meant Kevin De Bruyne had the ball in his stride.

"I don't know what my level is going to be but, to be fair, I don't really care," the Belgium midfielder said this week when he considered the chances of him reaching top form after two knee injury lay-offs this term.

If you can pull a moment of quality out of the bag as De Bruyne did in the fourth minute at Wembley, it is easy to understand the nonchalance. The delivery arched invitingly towards Jesus, skimming off the plush green turf and begging to be headed home. The Brazil striker duly obliged.

Given what lies ahead of them over a defining few weeks, at that moment City looked like the football equivalent of an elite prizefighter who has done everything just right in preparation. Lean, light on their feet, lightning on the attack and all moving parts whirring perfectly in-sync.

Pep Guardiola has been studying previous successful assaults on multiple trophies as his reigning Premier League champions and EFL Cup holders enter the final stretch of a quadruple bid.

The past week for City has felt like the sparring obligations dutifully carried out, wary of leaving their best form behind. Silva opening the scoring in the fifth minute to set a 2-0 Premier League win over Fulham in motion. De Bruyne did likewise against Cardiff City on Wednesday.

The difference here was the second goal did not arrive before City went into conservation mode.

Doing his best to preserve strained boxing analogies, Kyle Walker threw the head in on Alireza Jahanbakhsh and received a talking to from the referee. The England right-back was fortunate to have his yellow card upheld on a VAR review.

In last season's FA Cup, City were dumped out by Wigan Athletic after Fabian Delph saw red. Once bitten, Guardiola sent on Danilo in Walker's place at half-time, although back and hamstring pain also played a part

Guardiola clenched his jaw on the touchline and Walker, now slumped in the dugout, berated himself. It was a moment to underline the high stakes felt by all on the City payroll, however much their smooth playing style belies nerves. Every twist and turn holds a huge weight of potential consequence.

Laporte was then on hand to hack over his own crossbar with Glenn Murray poised to convert. The regal silk of his passing from deep is always worth savouring but, in those moments of last-ditch defensive combat, Laporte's relish is just as compelling and he looks every inch the son of a rugby player from Agen.

It had become the sort of slog probably familiar to Laporte Sr. And Liverpool, for that matter, who have endured and prevailed over the past week to ensure City have no margin for error in their Premier League defence. It was not particularly pretty but Guardiola's men held on and they are in position.

"I will announce you something, guys," a weary and hoarse Guardiola said afterwards. "It is almost impossible to win the quadruple, put it in the headlines."

'Quadruple' will indeed be in the headlines, although not in the context the Catalan tactician wishes.

Six remaining Premier League games conclude with a trip to Brighton, where some needle may remain, while the trip to Spurs the first of five in the Champions League, should Guardiola's ambitions of reaching a third final be realised – his team's jaw exposed to the haymakers of Europe's finest at any moment.

Throw in the FA Cup final and that's 12. Twelve elite championship rounds where they could crash to the canvas at any minute. The post-international break sparring is over - now it is time for Guardiola and City to put it all on the line for sporting immortality.

Next Messi and Ronaldo 'not as outstanding' as they wer
Read 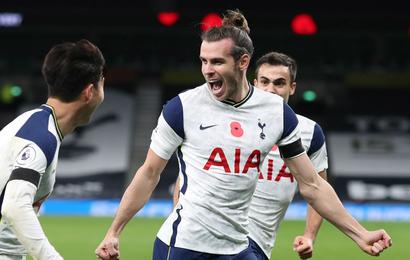