Diego Maradona began his playing career just shy of his 16th birthday. His first goal arrived barely a month later. The year was 1976, and the team was Argentinos Juniors. Ten years later, Maradona would light up the sporting world with Argentina. The years leading up to that spectacular moment would see Maradona play for a host of highly prolific clubs.

Maradona spent five seasons at Junior after scoring 115 goals. The great Argentine side, Boca Juniors, came calling. It was Maradona’s dream come true. A four million-dollar bid proved sufficient, and the 21-year-old was now playing for one of the best clubs in Argentina.

After scoring on his debut, Maradona suffered the first of many fallouts during his professional career. His public feud with his manager, Silvio Marzolini, was well documented. Their relationship, which was based on a lack of trust between the two, did not impede on Boca’s successful era.

Maradona very nearly signed for rivals River Plate, but opted not to, despite the lure of becoming their highest-paid star. Instead, he lined up in his first Super Clasico as the man who could break their hearts. His goal in Boca’s 3-0 win was consigned to the history books. Maradona would go on to win his only Argentine league title that season.

A successful year at Boca had come to an end, and Maradona was already receiving offers from Europe. A world-record fee of $7.6 million would take Maradona to Barcelona. Argentina’s World Cup-winning coach of 1978, Cesar Luis Menotti had refused to pick Maradona was widely criticised back then. Now the two linked up in the city.

Applauded by Real Madrid fans for scoring against them in El Clasico, Maradona endured high praise during his time in La Liga. It was an ovation that is very rare in Spanish football and between serious rivals such as Barca and Real.

Maradona also suffered his first career-threatening injury during his time at the Camp Nou. The Argentine suffered a broken ankle during a game against Athletic Bilbao player, Andoni Goikoetxea. It was later labelled as one of the most brutal fouls in the history of football. Maradona survived his first threat and returned three months later after intense physiotherapy.

Maradona’s Barcelona career would end the following season, in the most vicious and violent circumstances. The 1984 Copa del Rey Final pitted Maradona and Goikoetxea together. It was a chance for reconciliation, but it was instead marred by one of the most extraordinary on-pitch fights the game has ever seen.

After another heavy foul on Maradona by Goikoetxea, racist insults, and Barcelona’s 1-0 defeat; a furious Maradona snapped. He shared words with Bilbao’s Miguel Sola who provoked the Argentine at full-time. Players jumped in from all sides. Maradona headbutted Sola and knocked out the Bilbao goalkeeper.

Ironically, he was then karate kicked by Goikoetxea in the chest. It was mayhem, all in front of Spain’s monarch, King Juan Carlos I. Despite Maradona not starting the brawl, he effectively finished it on the Santiago Bernabeu pitch. He also ended his association with Barcelona. It was now off to Italy for a player under pressure. 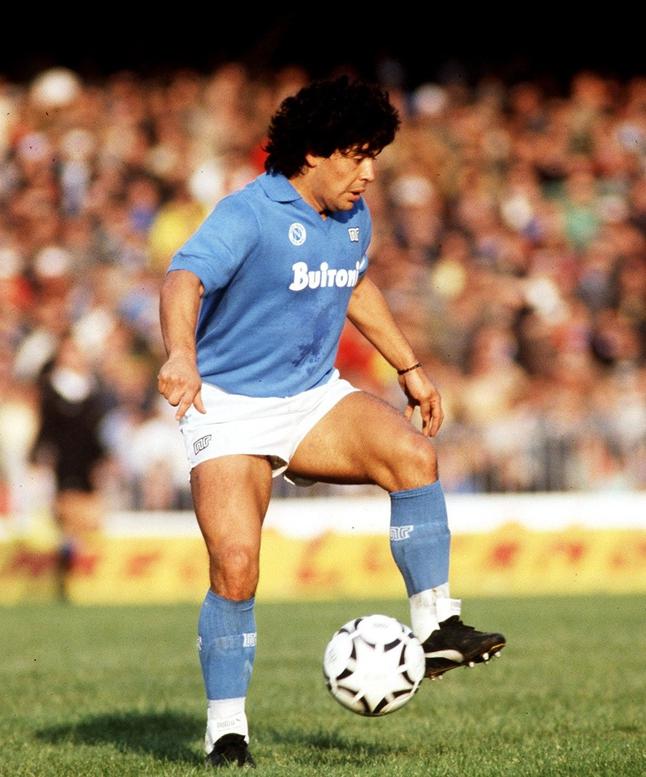 Napoli broke the world record transfer fee in 1984 to sign Maradona. A deal worth €12 million – astronomical at the time, peanuts in this day and age. 75,000 Neapolitans turned up to the stadium to watch the unveiling. It was a sensational buy – it was a partnership made in heaven and destined for great things.

1987 was a double-winning season for Maradona; Napoli also won the Coppa Italia that season. The stranglehold of Italian football was no more; this was Maradona’s season; this was Napoli’s existence.

Maradona spent seven years in Naples – it ironically coincided with the most successful period in their history. Napoli won the UEFA Cup in 1989, and they secured their second Scudetto in 1990. Despite the glory, Maradona was also no stranger to controversy. The club tried to support him during his issues. Maradona was magnificent on the pitch. Off the pitch, his drug use became problematic, and he received fines for missing games.

After scoring 81 goals in 188 games, Maradona returned to Spain to join Sevilla. A year later returned to his native Argentina to play for Newell’s Old Boys and his favourite club, Boca Juniors.

By now Maradona was now a mere shadow of his once-great self. A decade off drug abuse had rendered him overweight and unfit. His international career came to a halt at the 1994 FIFA World Cup, and Maradona’s career abruptly ended barely three years later. 12 goals in 61 appearances over five years, proving just how much Maradona had fallen.

It was a sad end to a great icon’s playing career.  Self-inflicted or not, Maradona’s club career will be remembered as one of brilliance interspersed with controversy and moments of madness. Maradona remains a god-like figure to those Naples this very day, a legend to Boca Juniors supporters, and an incredibly talented footballer to many millions around the world.

Next Iker Casillas: The Real Madrid and Spain great's i
Read