It appeared that Guangzhou, winners of the tournament in 2013 and 2015, faced an impossible task to progress after losing the away leg of their quarter-final tie 4-0 three weeks ago.

But they won Tuesday's return leg by the same margin and then emerged from an extra-time period that saw two Shanghai SIPG players see red with a 5-1 lead, forcing a shoot-out.

However, Andre Villas-Boas' men were able to survive and reach the last four, winning by a solitary spot-kick after Ricardo Goulart, who had earlier scored a hat-trick, hit the post with Guangzhou's first penalty.

That allowed Yu Hai to eventually score the clincher for Shanghai SIPG, whose only goal in the match itself was a magnificent Hulk free-kick.

Guangzhou's hopes of a dream comeback were launched when Alan netted twice in the first half to take his Champions League tally to seven for the campaign.

Shanghai SIPG thought they had weathered the storm when Goulart hit the crossbar in the second half and they still held a two-goal aggregate lead with seven minutes left.

But that was when the chaos truly began, as Goulart stunned the visitors with a quickfire double, his second – a header from Li Xuepeng's cross – coming in the first minute of stoppage time and sparking wild celebrations from Luiz Felipe Scolari and the home dugout.

Guangzhou then became hot favourites to triumph when Shanghai SIPG substitute Wang Jiajie was sent off in the first period of extra time, receiving a second yellow for a rash foul on Alan.

But, on 110 minutes, Hulk netted a 30-yard free-kick for the shorthanded visitors to score in his eighth consecutive AFC Champions League appearance, part of a stunning continental campaign that has also seen him produce seven assists.

Guangzhou still fought back with two minutes left to go when Wang Shenchao saw red for Muriqui, allowing Goulart to strike from 12 yards.

Then it was penalties, where nine out of 10 spot-kicks found the target and Goulart, after his stunning performance in the match itself, the unfortunate villain of the shoot-out, ending a tie that will live long in the memory. 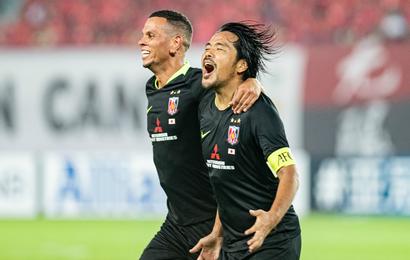