With just 100 days to go until the greatest show on earth, we profile each and every stadium that will be utilized throughout the FIFA World Cup Qatar 2022™, taking place between November 21 and December 18.

Rather uniquely for a World Cup, the eight stadiums in use throughout the tournament in Qatar are located in a radius of 34 miles, ensuring a significantly smaller carbon footprint compared to previous editions.

Here is a rundown of the eight stadiums that will be in use throughout the tournament:

The stadium’s design represents the gahfiya, a traditional woven cap worn by men and boys across the Middle Eastern region for centuries.

The Al Thumama Stadium was built with a view of symbolizing Qatar’s youth, as well as highlighting the country’s status as a major player in both the regional and global sporting scene.

Set amongst attractive green spaces, areas for play and relaxation have been installed to boost the visual appeal of the stadium’s surroundings and ‘enhance the lives and futures of the local community’.

The stadium’s revolutionary design will save 40% more fresh water compared to traditional stadiums across the globe, using recycled water to irrigate green areas.

Following completion of the FIFA World Cup Qatar 2022™, the stadium’s capacity will be reduced to 20,000 to ‘meet local needs and provide quality sporting infrastructure to developing nations’.

Give us 𝗼𝗻𝗲 𝘄𝗼𝗿𝗱 to describe Al Thumama Stadium.

The Al Thumama Stadium will host the following matches: 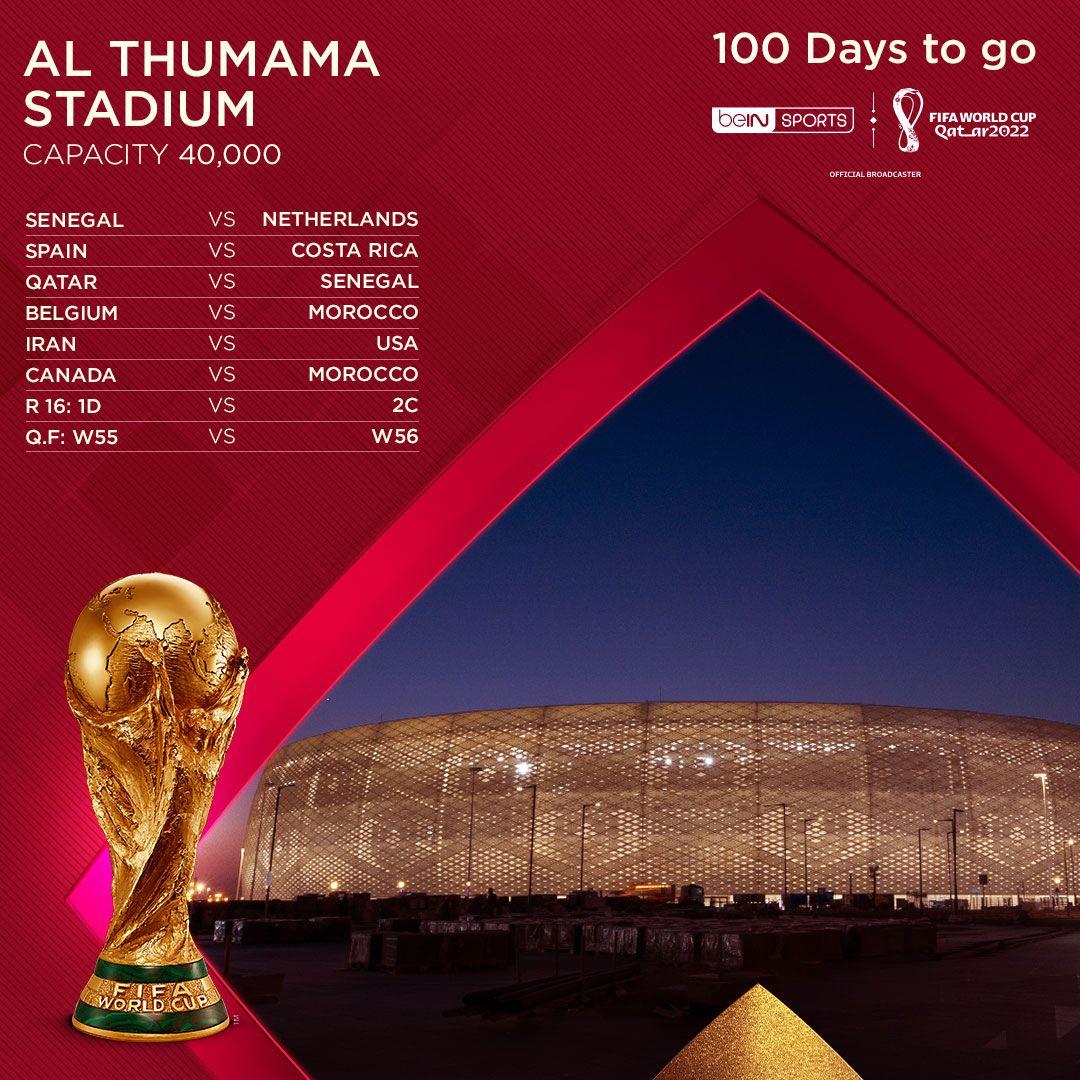 Originally built in 1976, the Khalifa International Stadium in Al Rayyan was reopened in May 2017 for the Amir Cup final and is the only stadium that hasn’t been built from scratch.

The stadium has since been used for Arab Cup and FIFA Club World Cup matches, as well as the IAAF World Athletics Championships. The stadium will be in use throughout the group stages, as well as both a Round of 16 fixture and the third-place playoff.

The renovation for the stadium was delivered by the Aspire Zone foundation, member of the Supreme Committee for Delivery and Legacy.

While the stadium may have been modernized, it is well known amongst the Arab world due to its previous history of hosting large scale events.

The dual arches on top of the stadium were erected to represent ‘continuity and embracing fans all over the globe’.

If you have a ticket booked for a World Cup match at this historic stadium, check out the 3-2-1 Qatar Olympic and Sports Museum, attached to the ground via a walkway.

✈️ Even from up above, the Khalifa International Stadium looks amazing! 🤩 #Qatar2022 pic.twitter.com/PltWNr1N9l

The Khalifa International Stadium will host the following matches: 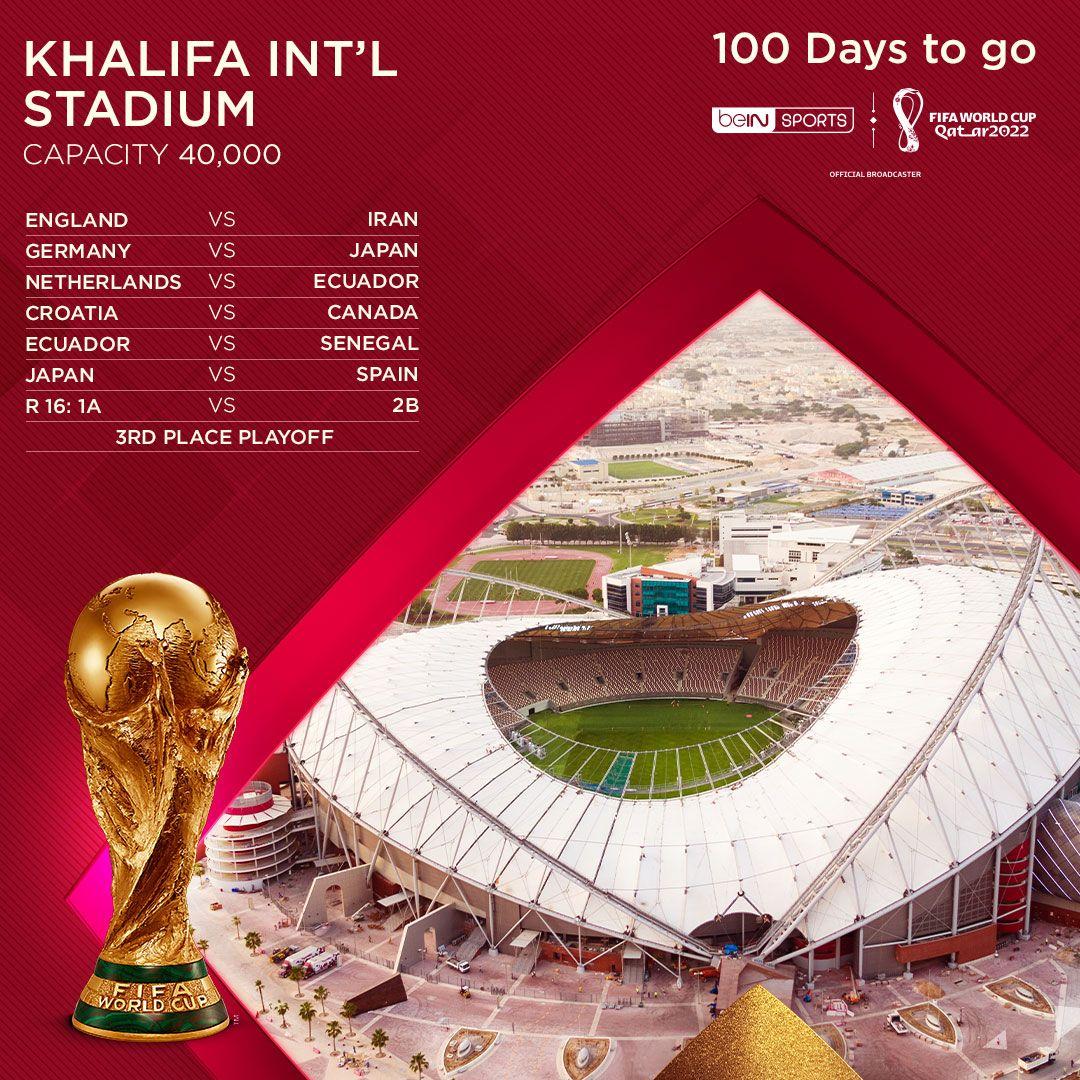 Located in the northern city of Al Khor, the Al Bayt Stadium is like nothing you will have seen before. The striking design will be viewed by fans around the world from the group stages through to the semi-finals.

The stadium takes its name from ‘bayt al sha’ar’ – tents that were ‘historically used by nomadic people in Qatar and the Gulf region’.

The stadium pays homage to Qatar’s past and present, while maintaining a focus on the country’s sustainability goals.

Al Khor itself is famous for pearl diving and fishing and following the tournament, will impact even more people across the globe.

Rather remarkably, the ‘tent’ is portable. The upper stand will be removed following completion of the tournament and provided to developing nations with a greater need for quality sporting infrastructure.

The Al Bayt Stadium will host the following matches: 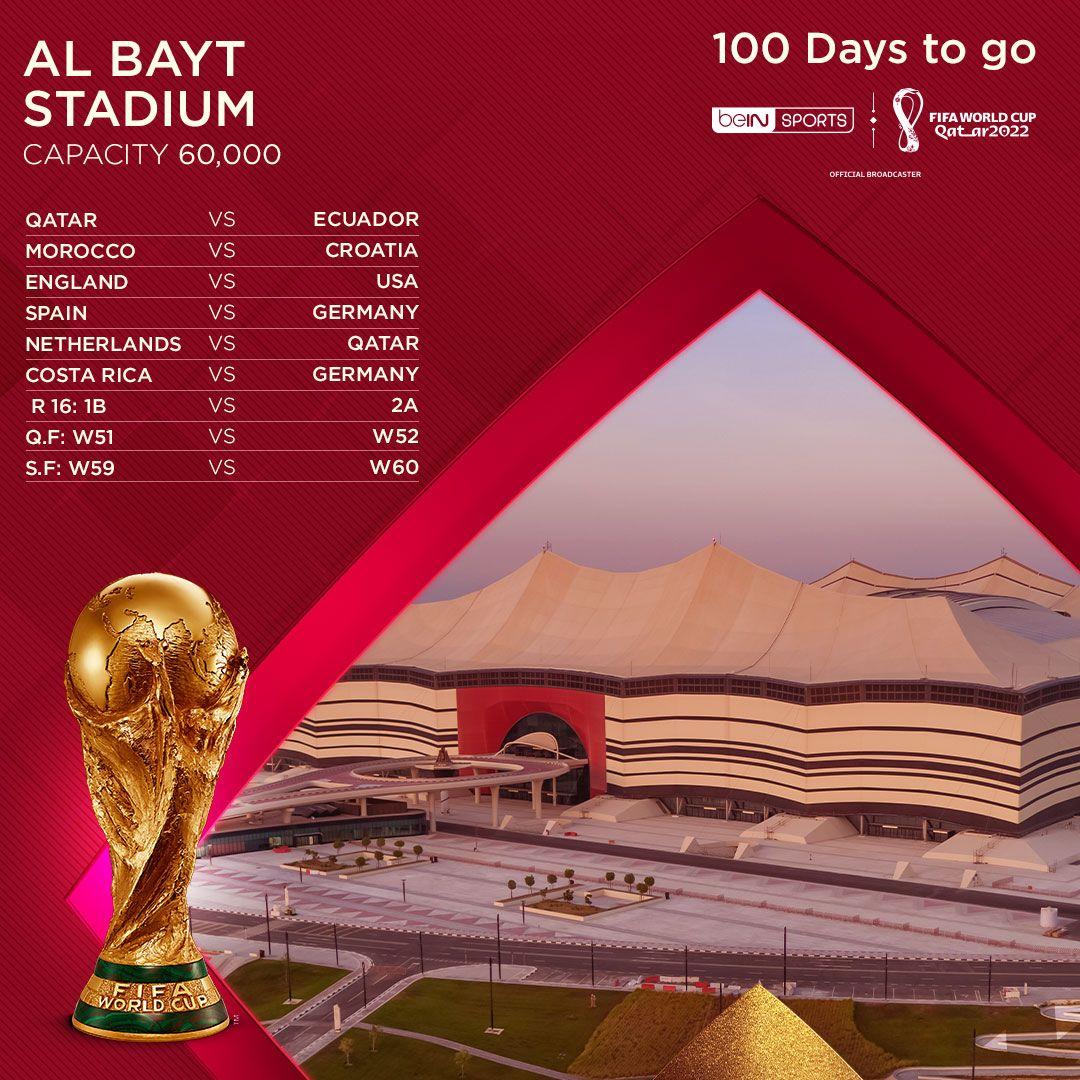 The stadium will host matches from the group stages through to the Round of 16 stage and the locals are particularly looking forward to welcoming fans from across the globe.

The stadium design incorporates symbols of local Qatari culture and the facilities surrounding the area represent the desert landscape of the country with sand-dune shaped structures.

Located on the edge of the desert, The Supreme Committee for Delivery and Legacy has ensured that environmentally friendly construction took place throughout the build.

Following completion of the World Cup, half of the stadium’s 40,000 seats will be removed and donated to projects abroad.

Relive the electric atmosphere and all the emotions from yesterday’s match between Australia and Peru at Ahmad bin Ali Stadium! 🇦🇺🇵🇪😱 pic.twitter.com/g67NCFRrnZ

The Ahmad Bin Ali Stadium will host the following matches: 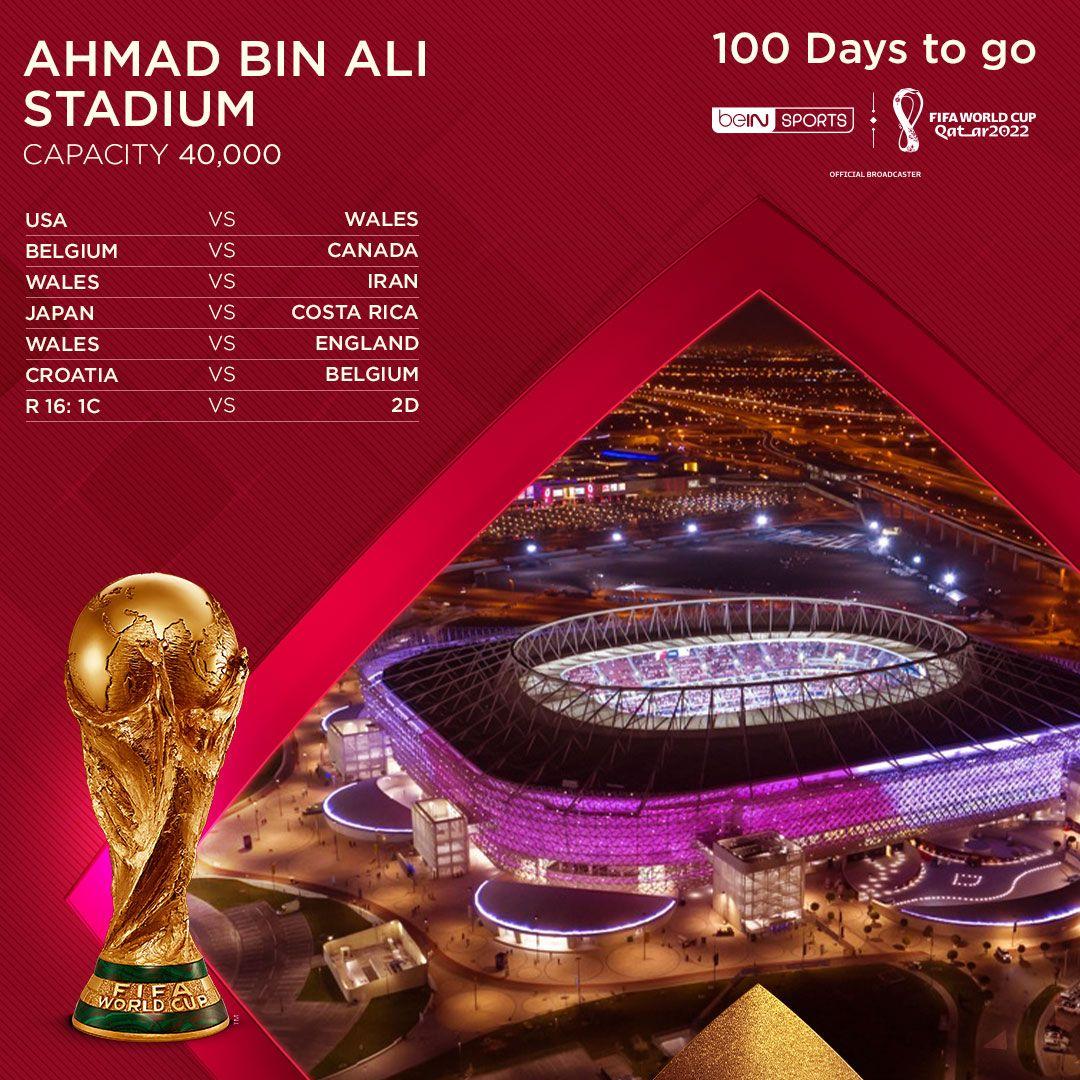 The Al Janoub Stadium, located in the southern city of Al Wakrah opened in May 2019, also hosting the Amir Cup final.

The stadium design was inspired by the traditionally used dhow boats, a fitting representation of one of Qatar’s longest inhabited areas and will host matches from the group stages through to the Round of 16.

The stadium itself is surrounded by lush green parkland complimenting the stunning arena. If you are one of the fans in attendance at Al Janoub, a visit to the waterfront or souq post-match will be a treat – win or lose.

Following completion of the tournament, the stadium capacity will be reduced to 20,000 with the removed seats once again being donated to football projects in need around the world.

The Al Janoub Stadium will host the following matches: The Education City Stadium, which has acquired its name due to being surrounded by Qatar’s leading universities, will host matches from the group stages through to the quarter-finals.

Like many other stadiums here, it will have a lasting impact on global football. Following the tournament, 20,000 seats will be donated to build stadiums in developing countries.

Easily accessible by road or metro, the ground is just 7km away from Doha’s lively city center and utilizes advanced cooling technology to ensure the comfort of all those in attendance.
The stadium is surrounded by greenery and has been built with sustainability at the forefront of the design team’s mind.

Education City Stadium will provide world class facilities for the area for many years to come and is a key addition built towards attaining the Qatar National Vision 2030.

The Education City Stadium will host the following matches: The Stadium 974, taking its name from Qatar’s internationally recognised dialing code (+974), is a true pioneer in stadium development.

Inspired by worldwide trade and seafaring, the venue is built from approximately 974 shipping containers.

The beauty of this? The stadium will be fully demountable – the first such venue in World Cup history.

The sets a new precedent in terms of sustainability, particularly for less populated nations planning to host the tournament in years to come.

The Stadium 974 is situated opposite West Bay, an area comprising numerous hotels that will play host to fans from around the world throughout the tournament.

After hosting matches from the group stages through to the Round of 16, the seats, roof and other components will also be donated to projects in need around the world.

The Stadium 974 will host the following matches: 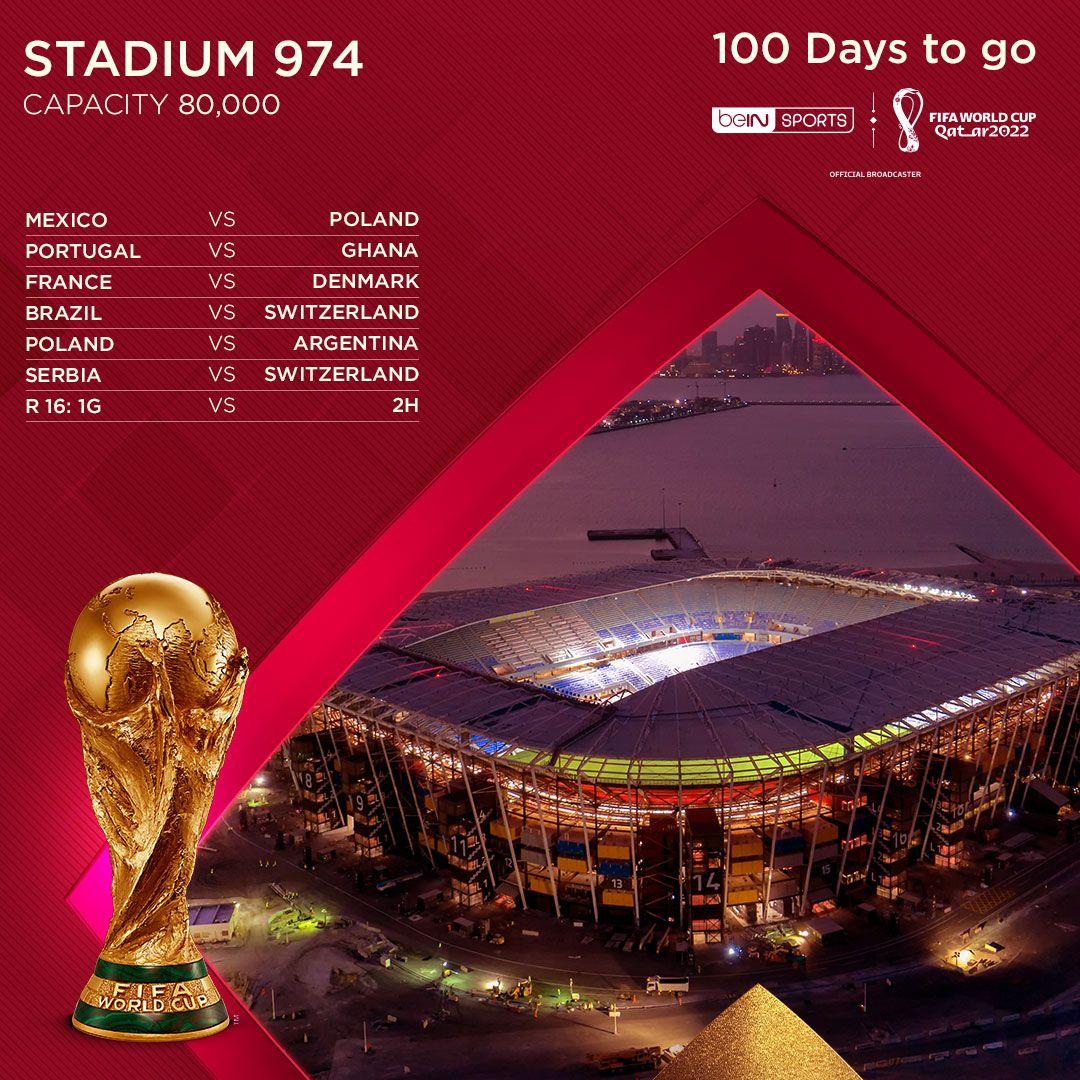 The Lusail Stadium is a grand 80,000 seat venue that will host the main attraction… The World Cup final.

Playing host to Messi and Co. throughout the group stages, this venue will be used throughout every stage of the tournament.

The design and golden exterior are ‘inspired by the interplay of light and shadow’, representing the traditional fanar lantern.

The stadium will be one of Lusail’s main attractions, which is already a popular residential area amongst expats and locals alike.

Following the tournament, the Lusail Stadium will be converted into a community space including ‘schools, shops, cafes sporting facilities and health clinics’.

Most of the stadium’s 80,000 seats will be donated to sporting projects in need, taking a small slice of World Cup history across the globe.

The Lusail Stadium will host the following matches: Next Queiroz set to return as Iran coach - reports
Read

European giants struggle for form ahead of Qatar

Last World Cup tickets to go on sale next week