Lewis Hamilton claimed his sixth victory at the Chinese Grand Prix to move ahead of Mercedes team-mate Valtteri Bottas in the Formula One drivers' standings.

Reigning champion Hamilton got the jump on pole-sitter Bottas, who beat Sebastian Vettel to second, into turn one and never looked in danger of missing out on a second straight triumph after his success in Bahrain.

It was the Silver Arrows' third straight one-two finish, making them the first team to start a season in such fashion since Williams pair Nigel Mansell and Riccardo Patrese in 1992.

With the frontrunners on two-stop strategies in Shanghai, Mercedes executed back-to-back pit stops for their two drivers in fluid fashion to effectively seal their places at the head of the race.

Vettel lost track position to Charles Leclerc, who saw a potential first F1 win slip through his fingers in Bahrain, into turn one but benefited from team orders en route to taking the final step on the podium.

Max Verstappen did well to keep the pressure on Ferrari, with Red Bull twice getting him into the pits ahead of the Scuderia duo, and the Dutchman managed to snatch fourth.

Leclerc claimed to be struggling with a gearbox issue in the latter stages and, despite being informed everything was fine over team radio, he was unable to catch Verstappen.

Pierre Gasly denied Vettel an additional point by posting the fastest lap at the climax of the race, providing a boost after a difficult start to his Red Bull career.

Next Hamilton and Bottas agree start was key
Read 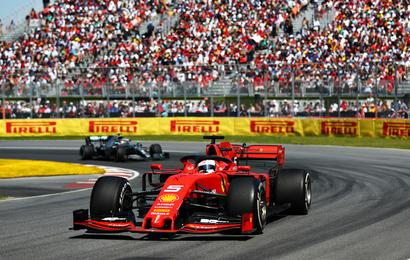