Zapata's 86th-minute goal was enough for Carlos Queiroz's men in the Group B encounter after they had struggled to consistently threaten a well-organised Qatar side.

Radamel Falcao started on the bench and James Rodriguez's impact was limited, at least until the latter set up the winner with a sublime pass.

Zapata met James' wonderful pass and headed into the far corner to move Colombia onto six points, while Qatar were left on one.

Colombia had a sixth-minute header by Yerry Mina correctly ruled out for offside against Roger Martinez.

However, they should have gone ahead in the 13th minute, only for James to steer a header wide after a great Martinez cross from the right.

Colombia controlled possession – they had 68 per cent in the first half – but struggled to penetrate Qatar's defence.

The lively Juan Cuadrado forced a comfortable save from Qatar goalkeeper Saad Al Sheeb from distance, while Stefan Medina sliced an effort into the side-netting.

Colombia thought they had a penalty for a handball by Abdulaziz Hatem to begin the second half, but the decision was reversed after a VAR review.

Set-pieces continued to look like Colombia's most likely avenue to a goal as Mina headed a corner wide in the 56th minute.

Martinez squandered one of his side's best chances just after the hour-mark, cutting inside after a good pass from James but shooting low and straight at Al Sheeb.

But Queiroz's men would find their goal, James' wonderfully chipped pass met by Zapata for the match-winner before the latter missed a glorious chance to complete his brace.

Goal! Duvan Zapata heads Colombia into the lead late on! It's been coming...

Save! Saad Al Sheeb comes up with a great reflex save for the Maroons. Colombia turning up the pressure here!

Into the second half, Abdulaziz Hatem stings the palms of David Ospina with a shot from a tight angle.

Chance! Stefan Medina ripples the side netting with a close-range shot.

Disallowed goal! Roger Martínez turns in from close range, but it's offside! An early reprieve for Qatar

Peep! We are away in Sao Paulo!

VAR fun and games from Zizito (my favourite mascot of 2019) I wonder if VAR will play a big impact in the game this evening?

Now team news for Qatar! No surprises here, Sanchez keeps faith in the same side that drew with Paraguay. Expect a 5-3-2 formation with Almoez Ali and Akram Afif leading the line!

Just like that, we have team news! First up Colombia! Carlos Quieroz makes two changes from the side that defeated Argentina, goalscorers Roger Martínezm and Duvan Zapata are in for Luis Muriel and Falcao.

Now a brief glimpse into the Qatar changing room! everything seems to be in order, should be getting the team news in soon!

Red hot insight from the Qatar team bus heading to the stadium... Players look at their phone and listen to music, who knew?

Good news gang! Zizito is in the building! Always a fan of a good mascot, and quite clearly Zizito is loving the vibe!

So here we go! Qatar in their second ever Copa America game! Felix Sanchez's young side did well in their opener against Paraguay, securing a 2-2 draw. The question remains can the Maroons step up against an impressive Colombia side, who defeated Argentina in their opening game. 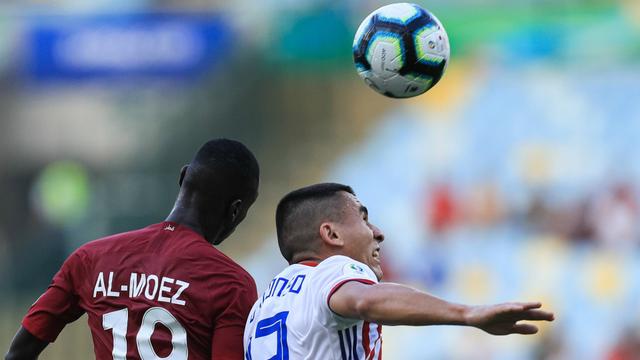 Good evening! Welcome to the Live Updates of Colombia Vs Qatar in the Copa America. The Asian Champions take on Colombia looking to build on their encouraging 2-2 draw with Paraguay. As ever, join me for all the latest team news, build up and goals as they go in from this huge game for the Maroons.