Bayern has already scored 50 goals under his replacement Hansi Flick, and no other manager in Bundesliga history has reached this milestone as quickly (16 games).

Frankfurt starts the weekend in 13th, and with both the sides above them playing on Friday (Hertha Berlin vs Union Berlin), they could well lose more ground in their quest to climb up the table. Five points clear of the Relegation Playoff spot currently occupied by Fortuna Dusseldorf, they could quickly get sucked into a survival skirmish, having lost their last four games.

Should they lose a fifth in a row, they would match the unwanted record they set in February and March 2017. Their manager at the time? Niko Kovac.

Bayern have won each of their last seven matches across all competitions and have taken 34 out of a possible 36 points from their last 12 Bundesliga games. The only game in which they dropped points came during a 0-0 draw against RB Leipzig on MD21.

Frankfurt are the weakest team away from home in the Bundesliga this season, picking up just seven points on the road. They have lost 9 of their 12 away games this term and have yet to keep a clean sheet in an away game. 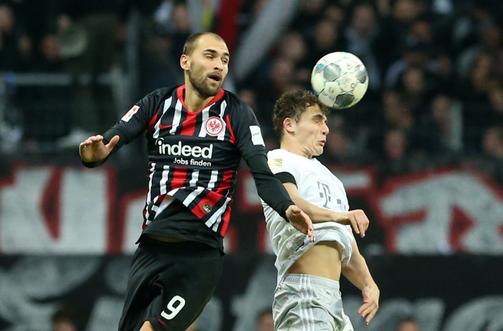 Thiago Alcantara - Boasting an 87.5% pass completion in the opposition half, the Spanish playmaker has quietly emerged as the heartbeat of Bayern’s attacking play in recent seasons.

He may not grab as many headlines as Robert Lewandowski, Thomas Muller, or Serge Gnabry, but his subtle brilliance is often something opposition teams are unable to deal with. Bayern have made the most passes and taken the most shots in the league this season and inevitably everything goes through Thiago.

Bas Dost  - The Dutch striker was once the hottest thing on the market, hailed as the next big thing after scoring 32 goals in 34 games for Heerenveen before stalling somewhat. Moving to the Bundesliga to join Wolfsburg, Dost made his name once more when scoring 9 goals in 10 games in 2014 and helping them to the German Cup.

Later recording 34 goals in 31 games for Sporting Lisbon, his return to German football has been a mixed bag, with 5 goals in 15 games so far for his struggling side, though among the top 10 duel-winners in the Bundesliga this season, he is the only player that is not actually a centre-back. His strength and hold-up play will be severely needed against the defending Champions.

Bayern were crowned Champions after a thumping win against Frankfurt last season, but while they will not win the league any time soon, Frankfurt are woefully out of sorts and look unlikely to offer much against a Bayern side that has picked up 25 points from their last 9 Bundesliga games.

Barring a miracle, Frankfurt’s poor away form will not be lifted this weekend, and Bayern will probably coast to a victory, reserving their strength and stamina ahead of Der Klassiker next Tuesday.

Watch the Bundesliga clash between Frankfurt and Bayern Live on beIN SPORTS with Angus Scott and Nigel De Jong on Saturday 23 May, after our coverage of Wolfsburg vs Dortmund at 1600 Mecca/1300 GMT on HD 11. Go to www.bein.net for more news, details, and updates for all your favourite live sports.