Conor McGregor is confident he will achieve billionaire status by the time he is 35 and wants to fight at the highest level for many more years.

The 31-year-old makes his UFC return in Las Vegas on Saturday against Donald 'Cowboy' Cerrone, as he looks for a first win since his victory over Eddie Alvarez back in November 2016.

McGregor revealed he is not a reckless spender anymore and with the combination of his fight earnings, endorsements and his own ventures such as clothing and whiskey ranges, he expects his wealth to reach 10 figures.

Asked by ESPN if he would fight until he was 40, McGregor said: "Yeah! I don't know, probably. I'm going to have a solid couple of years at least though, I know that. I'll be rocking until a good 35.

McGregor expects to achieve the biggest purse of his UFC career against Cowboy, with $80million the figure he has in mind.

He believes his $5m guaranteed purse against Cowboy, which is still a record for a UFC fighter, will be comprehensively eclipsed.

"It's going to be a good pay cheque," he said. "Probably the most ever in my mixed martial arts career. I'm estimating a good $80m.

"We have Australia, Canada and England and Ireland, so it should be a good one.

"[I made] $50m [against Khabib Nurmagomedov]. They think I'm toast but I'm still the bread.

"But no amount of money will stop my hunger to compete and entertain. Long may the opponents continue to come and I'll continue to knock them down."

The Irishman vowed to never forget his roots, having come from a life on welfare to achieve astonishing financial success.

McGregor said: "Of course I make sure I stay to my roots always and keep where I come from in my way of thinking. Never forget.

"I spend a lot less. I have a lot of things. About a year ago I read LeBron James had spent $1.5million annual on his health, his nutrition, training, everything and I spend nothing.

"Only in camp [did I spend] to bring a team together. So I thought that was not the way to do this, I drop money on a bleeding car or a watch!

"So now I'm spending on my health and my fitness, and that helped me. Then you can acquire even more when you are sharp.

"I spend less on possessions now, though you've got to go through that [phase] when you get a windfall. It doesn't excite me now. I'm more interested in creating."

Asked if he reads lists of the highest-paid athletes, McGregor added: "That's my list, I'm coming for that list! It alternates by year, not sure where I was this year, but not bad, I was up there.

"The decade one I saw Floyd Mayweather was top of the decade, so fair play to him, he's just not so good at the management of it.

"I'm still a good way away [from a billion]. I'll get there. I've got the methods. It's something that excites me, but it's not why I fight. I'm involved in so many businesses but there is no business like the fight business." 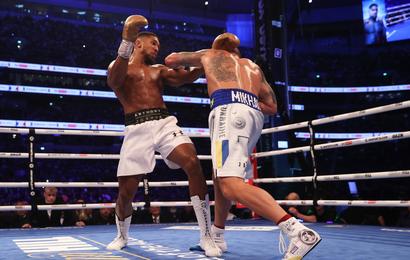